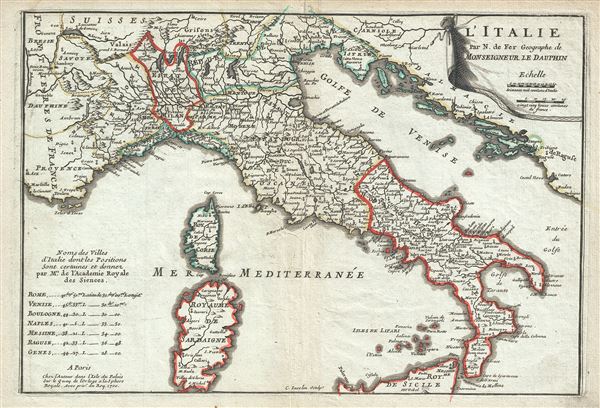 This is an attractive 1700 map of Italy by Nicholas De Fer. It covers from Tirol in Austria south to the northern part of Sicily and includes the Islands of Sardinia and Corsica. The map renders the entire region in extraordinary detail offering both topographical and political information with mountains beautifully rendered in profile. The lower left quadrant includes a table noting the geographical position of important cities.

At the time this map was made, most of Italy was under Spanish control. Following the War of Spanish Succession, Spain would lose many of its territories in Italy to Habsburg Austria, making Austria the dominant power in Italy.

This map was engraved by C. Inselin and created by Nicholas De Fer for his 1701 Atlas.