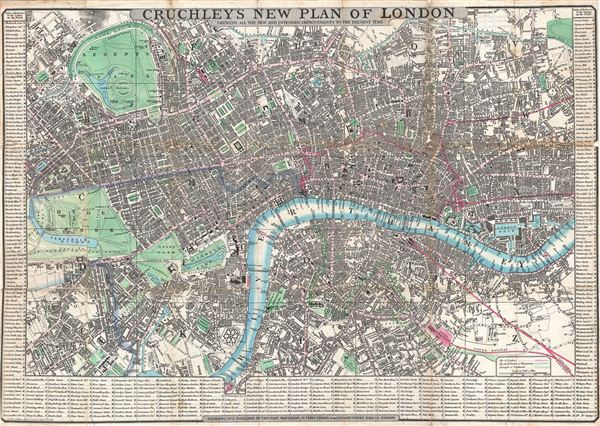 An extremely attractive 1846 pocket map of central London, England by George Frederick Cruchley. Centered on The Thames River, the map covers from Brompton and Hyde Park eastward as far as the east London Dock, and from Pentonville to southwards to Vauxhall Gardens. All streets, important buildings, railways, bridges (including the ephemeral Hungerforld Suspension Bridge), parks, and docks are noted. The map is surrounded on three sides by a detailed street index.

The early 19th century was a period of extraordinary growth for London as the industrial revolution motivated thousands to relocate to the teaming metropolis. The wealth generated by a global empire combined with a population explosion led to greater demand for a modern urban infrastructure. Cruchley aptly names this his 'New Plan of London' and takes pains to note that it shows all 'new and intended improvements.' From railways and canals, to new bridges, and advances sewage systems, Cruchley's London was transforming into a modern global megapolis. Cruchley first issued this map in 1827, with more than 18 subsequent editions, most of which included significant updates throughout. The present example is the 17th edition.

Good. Some wear where originally attached to binder. Discolorations on fold lines. Left and right margins narrow as issued. Backed with archival tissue for stability.