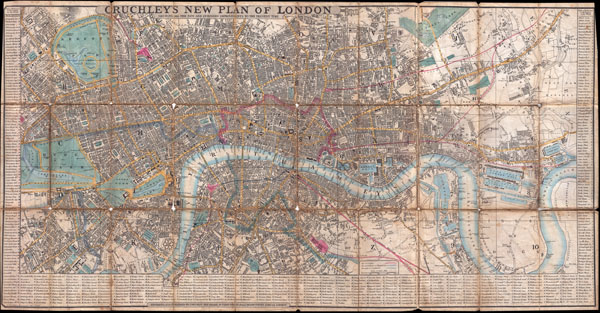 This is a very uncommon and obscure example of Cruchley's New Plan of London. Cruchley's famous plan of London was first issued in 1827 and was updated yearly until this issue, in 1849. The original New Plan of London was much smaller than the current plan covering from Pentonville to Shadwell and from Vauxhall to Brompton. This map is a variant that began to appear around 1829. In addition to the traditional coverage of central London exhibited in the 1827 plan, this map included an eastern extension encompassing the Isle of Dogs and the East India Docks. Though this configuration is much rarer than the more standard variant, there are recorded editions in 1829, 1830, 1833 and 1847. This example, dated June 1st, 1849 is exceptionally rare and does not appear in Hogwego or any of the other standard cartobibliographic references. Most likely, this is the last edition of this map Cruchley published. Like all other editions, this map is surrounded by a detailed street index. Streets, parks, important buildings, districts, and public transport is noted.