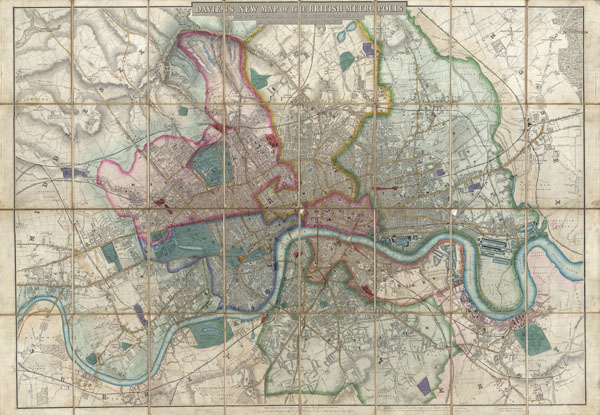 A magnificently engraved and historic plan of London.

A rare, extraordinary, and beautifully engraved 1852 case map or pocket plan of London, England, by B. R. Davies. Covers the center of London from Chiswick east to Bugsby's Reach and the Victoria Docks, extends north as far as Stamford Hill, and south as far as Nunhead Cemetery. Davies first issued this map in 1848 and updated it regularly well into the 1870s. In the period between 1830 and 1865 London experienced an extraordinary period of expansion and growth as new railroads increasingly brought suburban communities into the urban fold. Davies's annually updated maps are considered an important chronicle of this change. This map is beautifully engraved, with streets, blocks, important buildings, parks, topographical features, waterways and railroads clearly noted. Features beautiful original hand color. Dissected and mounted on linen in 32 panels, folds into original slipcase. Published for Benjamin Rees Davies of 6 George Street, Euston Square, by Saunders and Stanford, of 6 Charing Cross, London. While later examples of this map, from the 1870s, do occasionally appear, the earlier editions, predating 1860, are exceedingly rare. This is the earliest example of this map to appear on the market in over 30 years.