1741 Homann View and Map of London, England and Environs 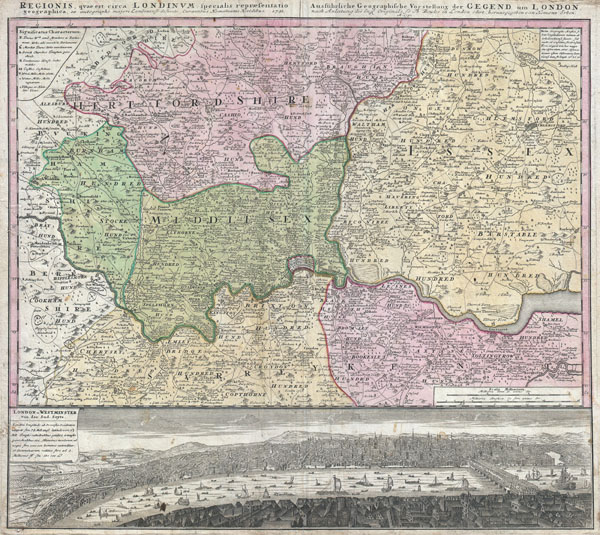 1741 Homann View and Map of London, England and Environs

A fine example of Homann Heirs' iconic 1741 map of London and its environs. Based heavily upon an earlier map of the region by Thomas Bowles, this map covers the London area from Berkshire (including Windsor Castle) in the west to Shamel in the east, extending north north as far as Bedford. Specifically focuses on Hertfordshire, Middlesex, Surrey, Essex and Kent. Offers extraordinary detail throughout, showing roadways, villages, London Streets, estates, and in many cases, individual homes. The lower portion of the sheet is dominated by a dramatic bird's-eye view of London and Westminster from Southwark across the Thames. View reveals a densely populated showing numerous boats, barges, and sailing vessels.

Very good. Original centerfold exhibits some minor wear. A couple of minor stains including an ink stain in view, lower left near border. Two old margin repairs and a penned dedication on verso.