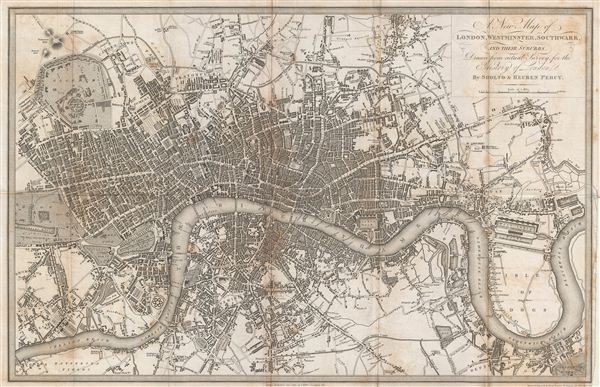 An uncommon 1823 map of London, england, by Benjamin Davies. Centered on the Thames River, this map covers London from Chelsea to the east India Docks and from Regents Park to Greenwich Park. The map identifies all streets, parks, important buildings, docks, and bridges. Davies drew and engraved this map for Sholto and Reuben Percy's History of London, as contained in their larger work The Percy histories, or, interesting memorials of the rise, progress, and present state, of all the capitals of europe. The map was published on October 1. 1823 by T. Boys of & Ludgate Hill, London.

Ruben and Sholto Percy (1821 - 1828) were London based urban historians active in the early 19th century. The Percys were ostensibly monks of the Benedictine Monastery of Mount Benger, but these identities were in fact pseudonyms for Joseph Clinton Robertson (1788 – September 22, 1852) and Thomas Byerley (1788 - 1824), respectively. The name "Percy" was derived from the Percy Coffee House of Rathbone Place, London, where Byerley and Robertson frequently met to discuss their work. The Percys are best known for their collective works entitled, "The Percy Anecdotes", a multivolume compilation of pirated stories. They also began work on an anecdotal history of Europe's major capitals, though the work, stymied by Byerley's death in 1824, never got beyond London. Joseph Clinton Roberston was a Scotting patent agent, writer, and periodical editor. He was a political radical in the early days of the working-class press in London and in the debates within the Mechanics Institute movement. Thomas Byerley was an English journalist, and became the editor of the Literary Chronicle and assistant editor of The Star>. He was also the editor of The Mirror of Literature, Amusement, and Instruction from 1823 until his death. Byerley also published under the pseudonym Stephen Collet, under which he published Relics of Literature in 1823, which included a long article on graphology which was reprinted in 1875. Learn More...