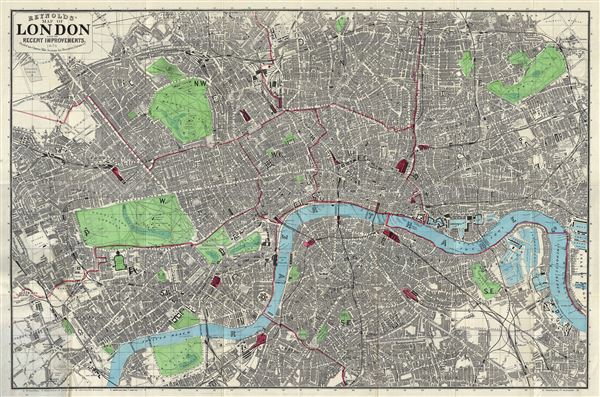 An uncommon example of the 1876 issue of Reynolds' tourist map of London. Centered on the Thames River, this map covers London from Highbury to Peckham and from West Kensington to the West India Docks. The map shows all omnibus and train routes as well as streets, parks, government buildings, rail stations, palaces, and churches. Railway terminals and railway lines are highlighted in red. Various tourist attractions and landmarks are identified throughout.

This map folds into its original binder and is accompanied by a short visitors guides features notes on churches, museums, galleries, cab fares, as well as a street index. The guidebook also contains additional maps and views. Maps of this type were designed with the traveler in mind, and are sized to fit into a coat pocket. The present example is the new edition issued in 1876 as Reynolds' Shilling Coloured Map of London with Visitors' Guide, Street Directory and Views.

Very good. Minor wear along original fold lines, especially where attached to binder'. Attached to original binder with guidebook.
Looking for a high-resolution scan of this?