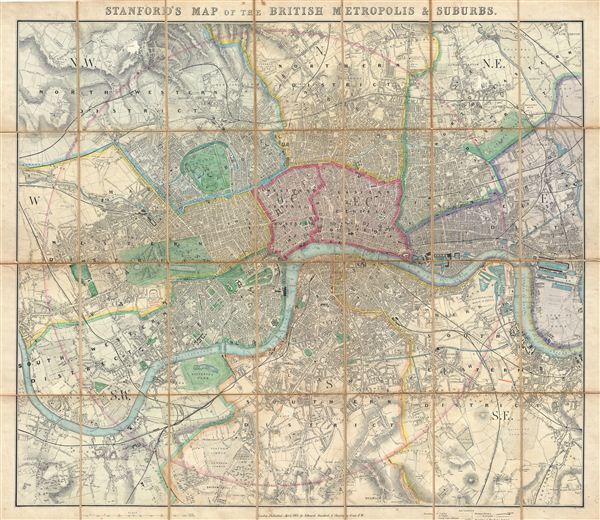 An extremely attractive 1861 pocket or case map of London, england, by edward Stanford. Centered on the Thames River, Stanford's folding case map covers central London from Holloway to Blackwall and from Dulwich to Brook Green. early in the Victorian era, London in the 1860s witnessed a period of massive growth, fueled by the Industrial Revolution, general prosperity, and immigration associated with its vast global empire. This, combined with construction of London's many railroads in the 1850s and the opening of the first Underground in 1863, led to the construction of numerous suburbs, growing London's footprint enormously in a relatively short period.

The map identifies all major streets, bridges, important buildings, gentlemanly estates, municipal buildings, taverns, parks, and the site of the 'International exposition.' The map is color coded according to district, with a circle centered on Charing Cross establishing a 4 mile radius. Stanford first issued this map in 1860 with the present example being the second edition updated to reflect the completion of the Victoria Railroad.

Good. Verso repair to original linen backing. A couple of minor scrapes on recto.
Looking for a high-resolution scan of this?