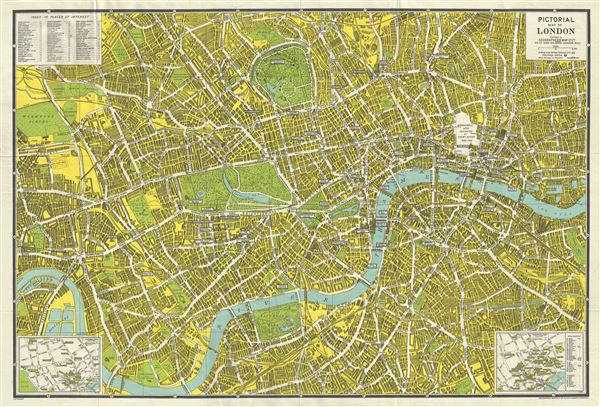 This is a wonderful plan or pocket map of London published c.1942 by Geographia Ltd. It covers downtown London from the Hammersmith Bridge and Wormwood scrubs eastward past Hyde Park and Buckingham Place to Whitechapel Road and the London Docks. Although undated, the map marks the 'approximate area destroyed by enemy action 1940-1941' near Guildhall, dating this map to 1942 or the World War II era. Unlike most English city plans of the period, this map replicates the pictorial style which popular in Paris during the early part of the 20th century.

The map features many of the buildings of London drawn in three dimensions. Gardens and parks are beautifully rendered in green with illustrations of ships sailing in the Thames River. Bridges, museums, cathedrals etc. are also identified. Insets in the lower right and lower left depict Theater land and Cinemas, respectively. Both insets detail individual establishments as they existed at the time including the Regal, Marblearch Pavilion, The Palladium, the Hippodrome Theater and the Coliseum Theater, among many others. Notes stations on the London Underground. An index in the top left quadrant notes several places of interest. Published in London by Geographia Ltd.

Very good. Mounted on linen. Folds into original paper binder.
Looking for a high-resolution scan of this?