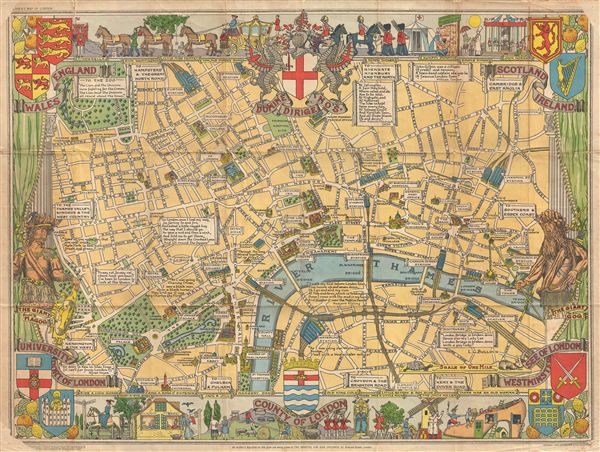 A colorful and attractive c. 1955 pictorial map of London printed by John Bartholomew & Sons. The comp covers central London from Hyde Park to Aldgate and from Green Park to Waterloo Station. The map was issued to raise funds for the Hospital for Sick Children, Great Ormond Street London. The map identifies most major roads with important buildings rendered pictorially. The whole is filled with charming quotations from various authors ranging from Rudyard Kipling, Alfred Noyes, Benjamin Franklin, and others. The whole is surrounded by decorative work intended to represent London life and folklore.

Leslie George Bullock (March 12, 1895 – November 29, 1971) was an English civil servant and cartographer active London during the middle part of the 20th century. Bullock was educated at the Alleyns School of Dulwich. After his schooling he took work with the Union Assurance Company with whom he trained as a fire surveyor. When World War I broke out he joined the Territorial Army. After the war he took work with the Port of London, where he remained until about 1932, when he was transferred to Scotland. Bullock enjoyed visiting London where he felt the truest way to experience the city was by riding the bus or talking a walk, where he would notice and appreciate little vignettes of life. This idea transferred to his cartographic designs, which are defined by small slice-of-life vignettes. All of his cartographic work was published by the firm of John Bartholomew. His most notable maps are his Children's Map of London, his historical maps of England, Scotland, Ireland, and Wales, his city plan of Glasgow, and his United Nations Map of the World.


The Bartholomew Family (fl. c. 1810 - 1920) is clan of map publishers active in London through the 19th century. They represent one of the great names in British cartography. The cartographic story of the Bartholomew family begins with George Bartholomew (January, 8 1784 - October 23, 1871, active from 1797), an engraver in the employ of the Daniel Lizars firm of Edinburgh. George was the first of six generations in the Bartholomew map-making dynasty. It was his son, John Bartholomew Sr. (1805 - April 9, 1861) who ultimately founded John Bartholomew and Sons in 1828. The John Bartholomew firm produced thousands of maps and rose to become one of the largest and most prolific cartography firms in Scotland. John Sr. was succeeded by his son, also John Bartholomew Jr. (1831-93). John George Bartholomew (1860-1920), son of John Bartholomew (1831-93) took control of the firm at its height. John George was a charter member of the Royal Scottish Geographical Society and supported the creation of a National Institute of Geography - a good idea that never took off. John George is also reliably attributed to be the first to bring the term "Antarctica" into popular usage as a denominator for the Southern Continent. In recognition of his work, John George was awarded a warrant from the king and often used the title "Cartographer to the King" on his imprint. Among his friends and admirers he was referred to as the "Prince of Cartography". Today the John Bartholomew firm has been absorbed into the HarperCollins family of publishers. The vast archive of maps and atlases produced by the Bartholomew family has since been transferred to the National Library of Scotland where it is currently in the cataloguing process.

Average. Backed on original linen. Some soiling and repaired splits on original fold lines, especially near margins. Some damage to corners - see image.
Looking for a high-resolution scan of this?