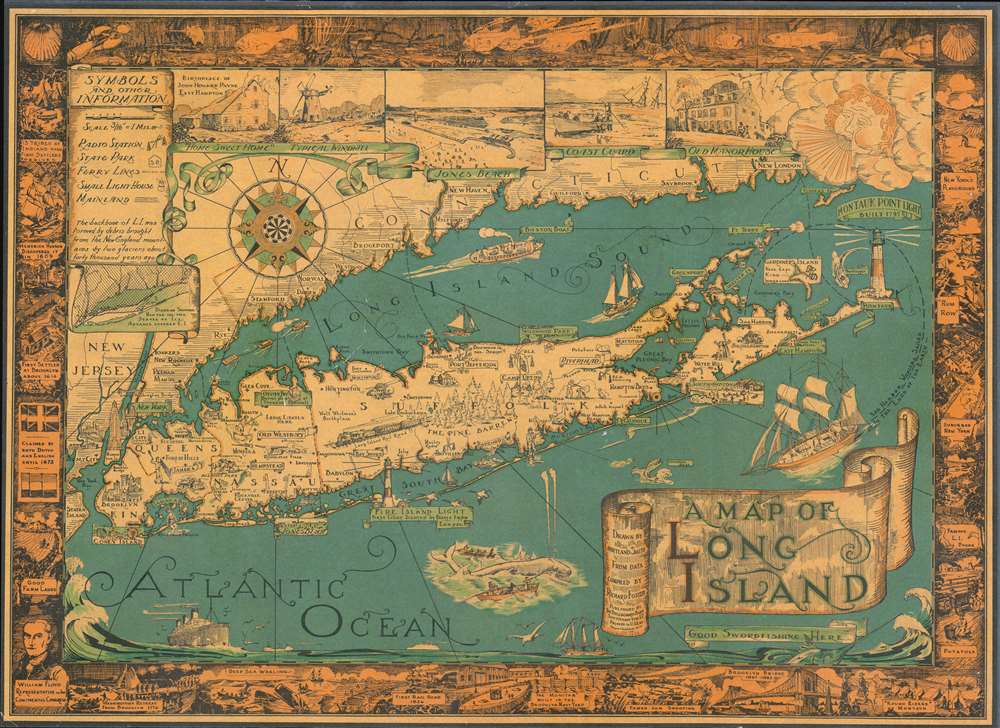 This is a charming 1933 first edition pictorial map of Long Island by Courtland Smith. This historical map covers from New London in Connecticut and Fishers Island south as far as the Lower New York Bay and Staten Island. Long Island is depicted in its entirety from Brooklyn and Queens east to Montauk. Throughout, the map notes cities, towns, beaches, radio stations, parks, ferry lines, lighthouses and several other important landmarks, scenes and activities. Several landmarks have been attractively illustrated, including the Montauk Point Light, Fire Island Light, Southampton, Coney Island, etc. Gardiner's Island - 'here Capt. Kidd buried loot' and Oyster Park –'Burial Place of Theodore Roosevelt' are noted. When Smith died, the mayor of Southampton remarked about this map:

The top left quadrant of the map includes the note, 'The backbone of L.I. was formed by debris brought from the New England Mountains by two glaciers about forty thousand years ago' as well as an inset featuring a 'Diagram showing how far the two Stages of Ice Advance covered L.I.' Five beautiful, illustrated views along the top border include the Birthplace of John Howard Payne East Hampton, a Typical Windmill, Jones Beach, Coast Guard, and Old Manor House. A decorative compass rose and an art deco style wind figure are also featured. In Long Island Sound and the Atlantic Ocean, pictorial illustrations of Boston Boat, ships, striped bass, a swordfish, whale fishing, and the Sag Harbor Whalers that 'sailed to the ends of the Earth' can be seen. The map is surrounded by an elaborate border, with underwater scenes at the top and historic events and places along the remaining three sides, including the '13 Tribes of Indians when First Settlers Arrived,' 'First Settled at Brooklyn in 1614,' 'First Rail Road 1836,' 'Brooklyn Bridge 1867-1883,' etc.

Courtland Smith, an architect by profession, drew this map during the years of the Great Depression as a 'keep-busy project' on the suggestion of his friend Richard Foster, who is credited here for compiling the data for this map. It quickly became extremely popular and according to Courtland Smith's obituary in the Southampton Press, it became the 'steady seller in gift shops throughout Long Island for more than 75 years.'

This map was drawn by Courtland Smith from data compiled by Richard Foster and published by The Billboard Barn, Southampton, L.I. It was printed by Gerson Offset Litho Co., Inc., New York. This map became extremely popular and has since been widely reprinted, with a second official edition appearing in 1961, and numerous subsequent copies. The present example is the original 1933 edition - which is increasingly rare. There are two variants of the first edition, one printed by George C. Miller, and the other, as here, printed by Gerson. There are also two colors schemes, which were issued simultaneously, the 'yellow and orange' as here, and the 'blue', which offers more muted tones. It is also of note that most examples of this map were varnished over to give the piece an 'antique' look - unfortunately, the varnish and subsequent backing on cardboard or wood, often caused extreme damage. So while later editions of the map are not uncommon, examples of any edition good condition are extremely scarce.


Albert Gerson (January 23, 1903 - March 9, 1977) was a Jewish Russian-American lithographic job printer and inventor based in New York in the mid-20th century. The place of his birth is something of a mystery. Documents predating 1930, list his birthplace as Russia. After 1930, including on his 1942 World War II draft card, his birthplace is listed as Brooklyn. During the 1920s he worked as a millinery salesman, but by 1930, he established his own printing concern, Gerson Offset Lithography. In 1960, Gerson invented the Gerson Multiplater - a labor saving machine for making photo-offset lithograph plates. In 1924, he married Cecelia Schwehel (1924 - 1972). Learn More...