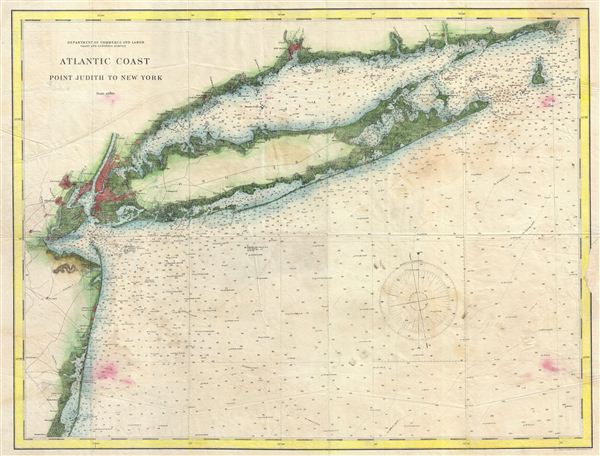 An uncommon and appealing nautical chart of New York City, Long Island, the Connecticut coastline adjacent to the Long Island Sound, and parts of New Jersey to Barnegat Bay. A beautiful example of the Coast Survey's work in this region with countless depth soundings throughout and some good inland detail along the coast, especially around New York City, New Haven, and the Long Island Forks. Printed and engraved by the Norris Peters Company of Washington D.C.

Good. Map exhibits some wear and toning on original fold lines as well as a few additional creases. Some staining near the South Fork, in the lower right, and in the lower left. This chart was used for actual navigation and has some old pencil marks, partially erased, to that effect. Some damage to lower left margin - repaired.
Looking for a high-resolution scan of this?