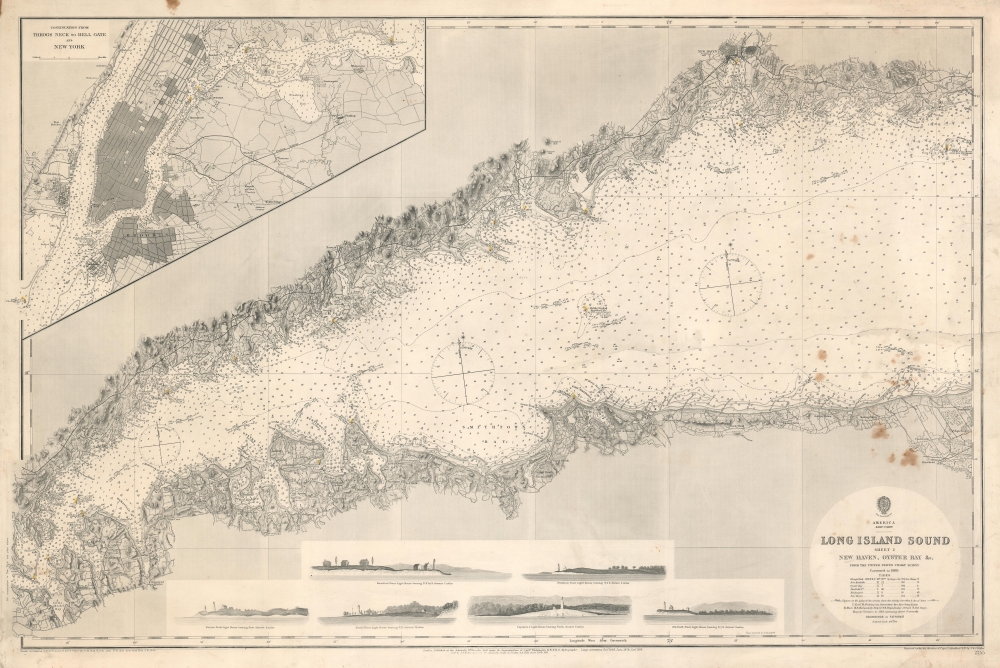 This is an 1886 British Admiralty nautical chart or maritime map of Long Island Sound. Illustrating from Hogshead Point on the New England coast and from Jacob Point on Long Island to Throg's Neck, the chart boasts impressive coastal detail. Bays, harbors, points, and other features along the New England and Long Island coastlines are rendered with precision. Numerous depth soundings appear throughout Long Island Sound, along with notations marking currents and navigational hazards, such as shoals. Inland detail includes labeling towns and illustrating the road network, but in general, only reaches as far as the surrounding bays and harbors. The thick black line on the New England side of Long Island Sound is the New York, New Haven, and Hartford Railroad. Several lighthouses along both coastlines are labeled and highlighted in yellow. Six coastal profile views are situated along the bottom border: Stratford Point Lighthouse from two different perspectives, the Eaton's Neck Lighthouse, the Sand's Point Lighthouse, the Captain's Island Lighthouse, and the Old Field Point Lighthouse.

The inset in the upper left quadrant details New York City from Throg's Neck to Hell Gate and south along the East River to New York Harbor and Gowanus Bay. Manhattan's iconic street grid is apparent with Broadway cutting a clear a diagonal line across the island.

This chart was created by the British Admiralty from United States Coast Survey charts and first published in 1861. It was updated several times (which was common practice for coast surveys as updated information was submitted to the issuing agency), and the present example reflects updates through January 1886. Several records for the Admiralty Long Island Sound chart appear in OCLC, but they all postdate the present example.