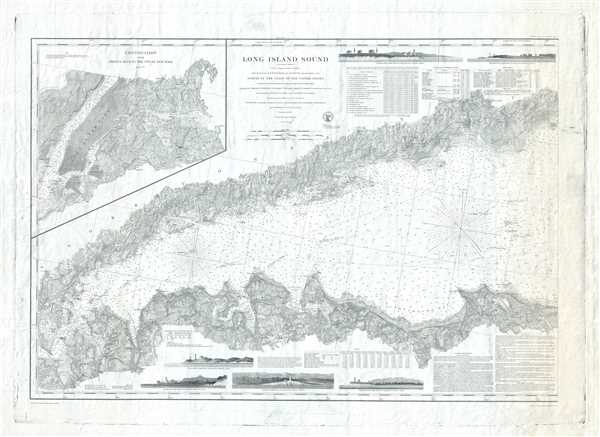 Highly detailed and meticulously engraved, myriad depth soundings fill Long Island Sound (this map was originally created to be used on board ships as a navigation aid). Islands, peninsulas, and points along both coastlines are labeled, along with numerous harbors and coves. Individual farms are illustrated, as well as forests, hills, and other physical features. Towns and cities dot the landscape, with individual homesteads appearing here and there. Views of the Stratford Point Light House are included along the top border, as well as views of the light houses at Eaton's Neck, Sand's Point, Captain's Island, and Old Field Point along the bottom border. Tables concerning the direction and force of tides, variations of the magnetic needle, the location of light houses in the region, and tides are also included. Sailing directions and notes on dangers along both the north and south shores of Long Island Sound are situated in the lower right corner.

An inset map depicting from Throggs Neck to the Manhattan is included in the upper left. Again, myriad depth soundings are present in both the Hudson and East Rivers and in New York Harbor. Manhattan (labeled as the City of New York) is fully laid out in a grid, while both Williamsburg and Brooklyn only occupy a small portion of Long Island. Jersey City, Hoboken, Governor's Island, Buttermilk Channel, Blackwell's Island, Riker's Island, and Flushing are also present.

This restrike was produced in the 1920s from the original first edition 1855 copper plate of the United States Coast Survey nautical chart of Long Island Sound. The chart was produced under the direction of F. R. Hassler and A. D. Bache, the Superintendents of the Coast Survey of the United States, with triangulation, topography, and hydrography work completed by several teams of workers and their assistants.