1780 Bonne and Raynal Map of Florida, Louisiana, and the Carolinas 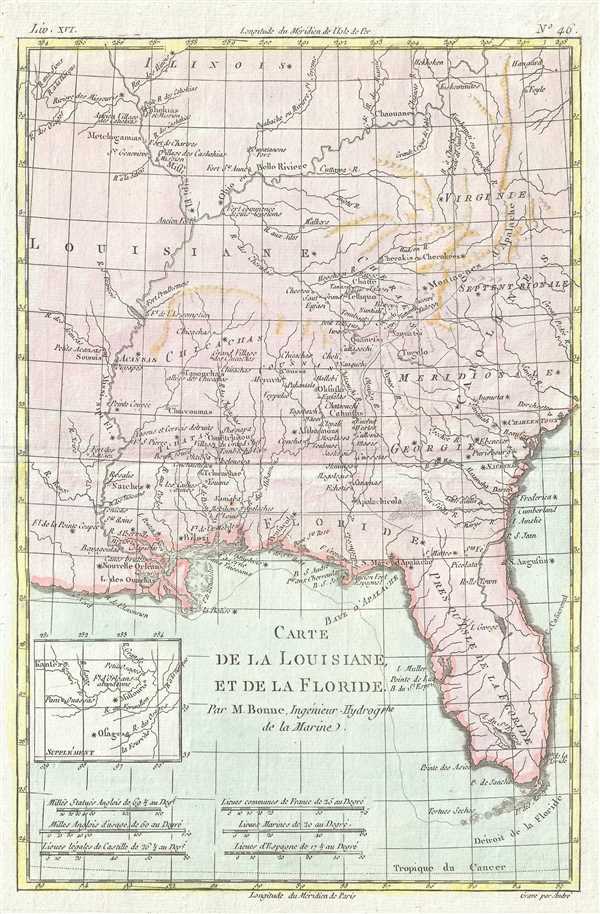 1780 Bonne and Raynal Map of Florida, Louisiana, and the Carolinas

A map of the southeastern United States published during the American Revolutionary War.

This is a 1780 Rigobert Bonne and Guillaume Raynal map of Florida, Louisiana, and the Carolinas. The map depicts the region that corresponds to the modern-day states of Florida, Georgia, Alabama, Arkansas, Kentucky, Tennessee, North Carolina, South Carolina, Virginia and Louisiana. Of the colonies, Florida, Georgia, South Carolina, North Carolina, and Virginia are illustrated, each of which is also labeled. Coastal settlements, such as New Orleans (Nouvelle Orléans), Biloxi, Pensacola, St. Augustine, Savannah, and Charleston (Charles Town) are also labeled. Considerable detail is included throughout the interior that had only been tenuously explored up to this point, naming numerous American Indian tribes and villages including Apalachicola, Echicachae, Chaccoumas, Acansas, and many others. At this point in the history of the New World, Florida was still part of the Spanish Empire, while the other four states were fighting for their independence from England in the American Revolutionary War. An inset in the lower left quadrant focuses on the upper Missouri River, which was of interest at the time as a possible water route to the Pacific.