1852 Blackwood Map of Egypt and the Nile Delta 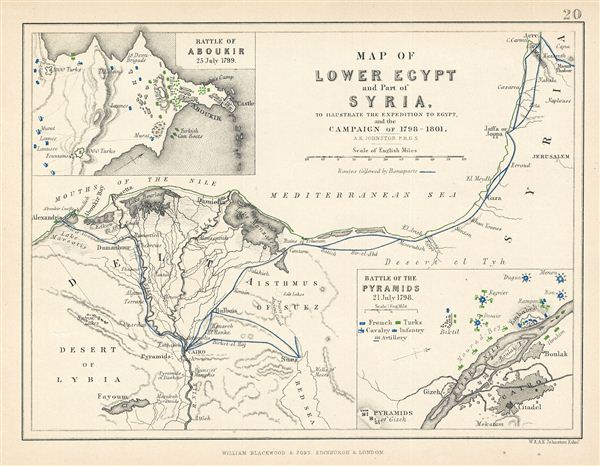 1852 Blackwood Map of Egypt and the Nile Delta

This is a fine example of Blackwood's 1852 map of Lower egypt and parts of Israel / Palestine (here labeled Syria). It covers the northern parts of egypt and the Nile Delta from the Mediterranean Sea to Upper egypt and includes parts of modern day Israel / Palestine. This map was drawn to illustrate Napoleon's expeditions to egypt and the campaign of 1798-1801. An inset map in the upper left quadrant of the map details the Battle of Aboukir 23 July 1799. Another inset in the bottom right quadrant details the Battle of the Pyramids on 21st July 1798. Map is hand colored showing the routes taken by Bonaparte and the positions of the French and the Turks. Various rivers, towns, cities and several other topographical details are marked with relief shown by hachure. This map was drawn by A.K. Johnston F.R.G.S and published by William Blackwood and Sons to be issued as plate no. 20 in Atlas to Alison's History of europe.

Blackwood and Sons (fl. 1804 - c. 1900) published out of Edinburgh and London throughout the 19th century - roughly from 1804 to 1898. The founder of the firm Scotsman William Blackwood (November 20, 1776 - September 16, 1834), was of humble origins, but his business acumen and dedication to the printing trade pushed his firm to prominence. He is most noted for publishing Blackwood's Scottish Magazine, one of the most important early magazines of 19th century England. In addition to his career as a prominent publisher, Blackwood took an active interest in civic matters and was elected Commissioner of Police in 1828. Following his death the firm was taken over by his sons, Alexander, John, and Robert Blackwood, who changed the imprint to "Blackwood and Sons". The firm was subsequently passed down through the heirs, most of the Blackwood name, until the late 19th century. Learn More...