1753 Vaugondy Map of Luxembourg and Belgium 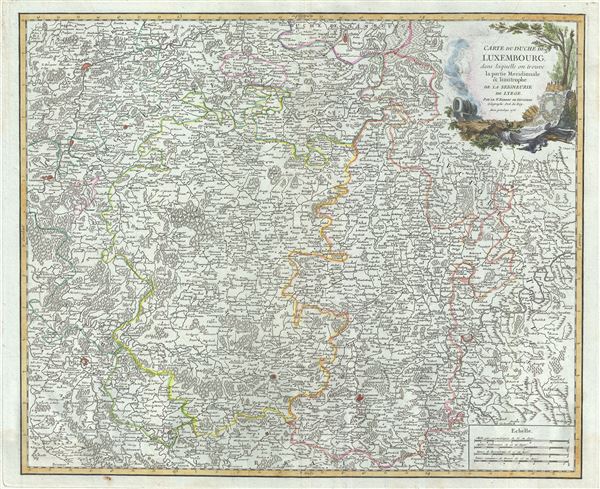 1753 Vaugondy Map of Luxembourg and Belgium

This is a beautiful 1753 map of the Duchy of Luxembourg and part of southern Belgium by Robert de Vaugondy. It covers Luxembourg along with parts of neighboring Belgium and Germany and extends from Liege south to Beaumont in France and from Namur in Belgium east as far as Manderscheid in Germany. This extremely detailed map notes important cities, towns, rivers, mountains, roads and a host of additional topographic features.

At the end of the Eighty Year's War(1568-1648), the Low Countries were divided into the United Provinces and Southern Netherland, of which Luxembourg became part of. This portion of the Netherlands was known successively as the Habsburg Netherlands, the Spanish Netherlands, and finally Austrian Netherlands until in 1795 Napoleonic forces invaded and set up a new French client state, the Batavian Republic.

The top right quadrant of the map includes a beautifully engraved title cartouche. The map was drawn by Robert de Vaugondy in 1753 and published in the 1757 issue of his Atlas Universal. The Atlas Universal was one of the first atlases based upon actual surveys. Therefore, this map is highly accurate (for the period) and has most contemporary town names correct, though historic names are, in many cases, incorrect or omitted.

Rumsey 3353.052. Pedley, Mary Sponberg Belle et Utile: The Work of the Robert de Vaugondy Family of Mapmakers, 225.
Looking for a high-resolution scan of this?