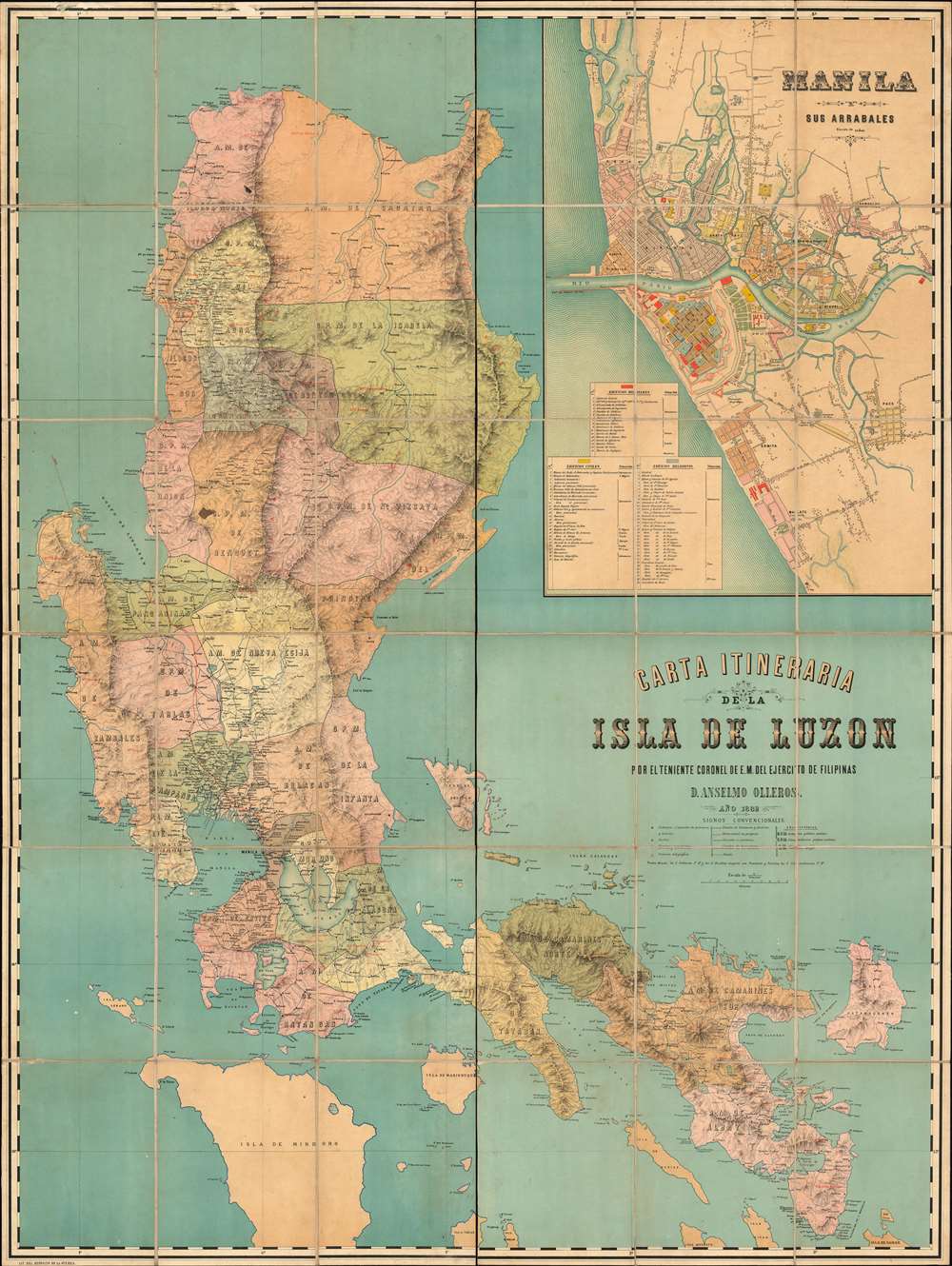 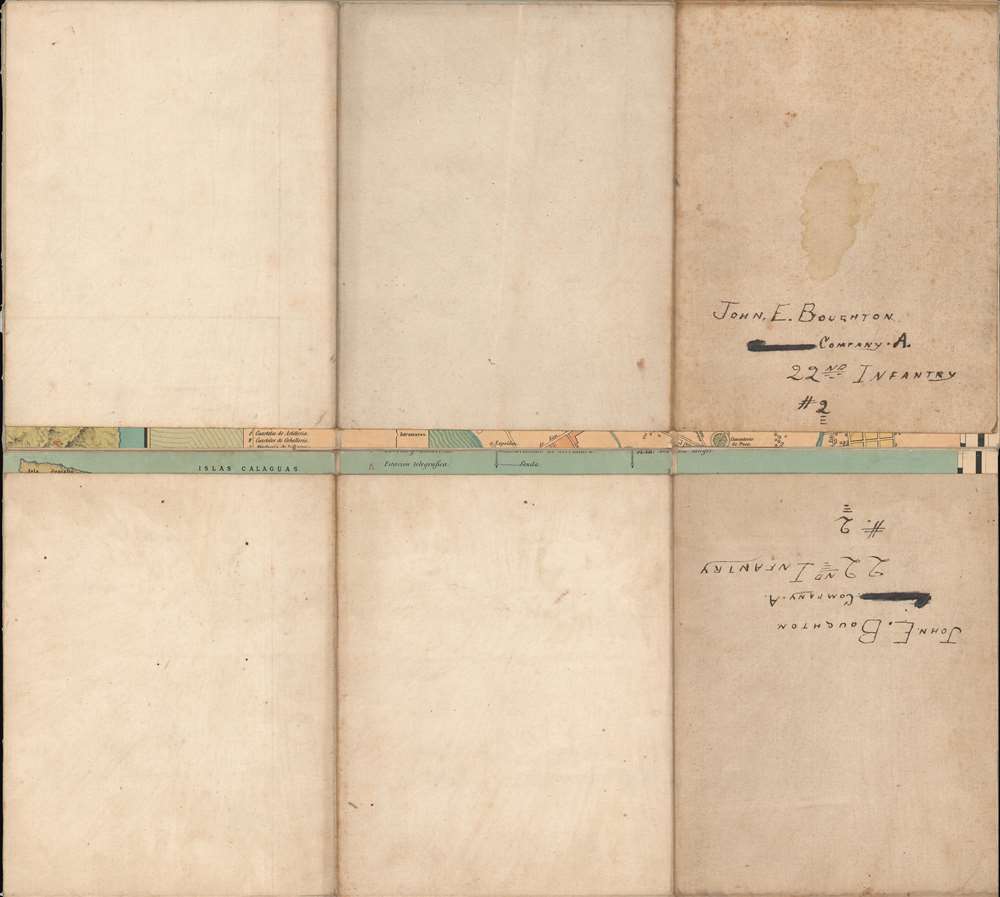 A very rare and important large-scale 6-color chromolithograph 1882 map of Luzon and Manila, the Philippines, by the Spanish military engineer Anselmo Olleros y Mansilla. The map details all of Luzon as well as the surrounding waters. It is color coded by political-military districts (as defined by the Spanish administration) and shows proposed railroads, telegraph stations, existing roads broken down by grade, and more. Topography is illustrated throughout using delicate shading with mountain peaks labeled in red.

Rarity and a scarcity of data regarding this map's production make it difficult to ascertain its raison d'être. It is clear that this map is the result of supreme skill and is overall a production of the highest caliber, employing the most expensive and sophisticated printing techniques of the era. The focus on military installations, military districts, topography, and infrastructure, suggest administrative use. At the time, Spanish military and civilian governors were aggressively modernizing infrastructure throughout Luzon, planning railroads, upgrading existing roads, and expanding the telegraph network. This was also a period of increased Philippine nationalism and anti-colonial activity. Although relatively early in the push for Philippine independence, the map may have been issued in anticipation of military action.

A large inset in the upper right offers the finest map to date of Manila and its suburbs. Presented on a scale of 1:10000, the Manila inset covers from the Barrio de S. Nicolas to Pasay and from the Bocana de Vistas to Pasay. The Pasig River divides the city in two, Then, as today, the Pasig River divides the city. Highly detailed, roads, neighborhoods and civic sites, such as cemeteries, are labeled. There is an index in the lower left which naming seventy-seven military, civil, and religious sites around the city. Coding on the inset gives precedence to military facilities, underscoring the that this map was produced for use by military personnel. Although merely an inset, this would remain the finest map of Manila until the American period. Just the Manila inset was reproduced for U.S. military use during the 1898 Spanish-American War by Norris-Peters.

The map includes the projected course of the Ferrocarril de Manila-Dagupan. At the 1875 instigation of King Alfonso XII of Spain, Don Eduardo Lopez Navarro laid out the presumed railway line, which was promptly approved by the colonial administration. When this map was made, the railroad remained in the speculative and planning stages. It was not until 1887 that a concession for the construction of a railway line from Manila to Dagupan City was granted to Don Edmundo Sykes, and until 1888 that construction began. The first commercial train to run on this line followed in 1892, ten years after this map was printed.

There are a few minor manuscript updates to the map completed in a fine and professional hand. These included a revision of the Bulacan / Nueva Ecija border where the old border has been carefully scratched out and replaced by a manuscript border slightly to the south running through the town of Baluarte. Further north, the town of Zaragoza is noted in pencil. Zaragoza was founded four years earlier in 1878, suggesting that some of the underlying cartography used to compile this map must antecede that date.

This map bears the handwritten name on the verso John E. Boughton, offering limited provenance. Boughton served 22nd Infantry, Company A, of the U.S. Army from 1897, when he voluntarily transferred from Troop B, 2nd Calvary. The unit was sent to the Philippines in 1899 to fight the Philippine-American War (1899 - 1902). They remained in the Philippines after the war until 1905. We have not been able to unearth further information about Boughton, but we can assume the map was collected during his service with the 22nd.

This map was surveyed and compiled by Anselmo Olleros y Mansilla in Madrid. It was printed and published by the Depósito de la Guerra in Madrid. Examples are scarce with no identifiable market history. We have identified 4 examples in institutional collections. One example is known to have been in collection of the Philippine politician Edgardo J. Angara when he loaned it to the Metropolitan Museum of Art.

Anselmo Olleros y Mansilla (18xx - January 1895) was a Spanish military officer and engineer active with the Cuerpo de Estado Mayor (Corps of the General Staff) in the Philippines. He was probably born in Béjar, Salamanca, Spain. Olleros arrived in the Philippines on November 12, 1872. He generated at least one map, an impressive large-scale map of Luzon, published by the Depósito de la Guerra in 1882. His more famous brother Tomás Olleros y Mansilla (1838 - 1890), was also active in the Philippines and is known for his reports on East Indian trade, for seizing the Tawi Tawi Islands of Borneo for Spain, and later in life, for his poetry and art. Anselmo Olleros died in Madrid in January of 1895. Learn More...


Depósito de la Guerra (1810 - July 28, 1931) was a department of the Spanish army under the Cuerpo del Estado Mayor founded in 1810 to publish, collect, and preserve military documentation, including letters, maps, photographs, and more. It was reorganized in 1847 as the Reglamento del Depósito, subdividing it into two departments: the Sección de Historia y Estadística Militardel Depósito and the Sección Topográfica y Militar del Depósito. From 1904 it was placed under management of the Estado Mayor del Ejército. The Depósito de la Guerra was abolished by the Decree of July 18, 1831. Their archives were later reassigned to the Servicio Histórico Militar. Learn More...