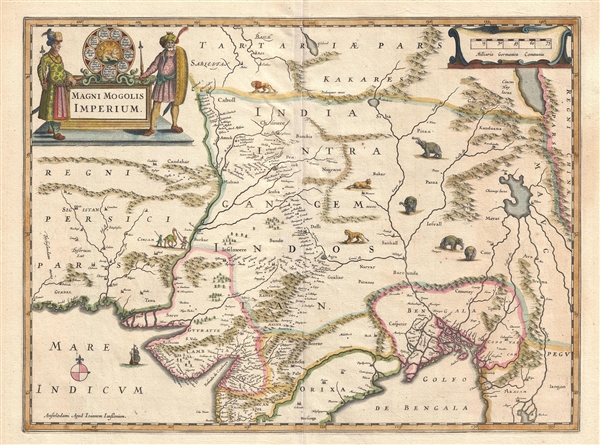 Fine early map showing the Mughal empire under the reign of Shah Jahan.

A fine c. 1640 Jan Jansson map of the Mughal Empire of Northern India. Centered on the Mughal capital of Agra, the map covers, roughly, from Kabul to Orissa and Deccan, and from Persia to Bengal. It depicts the empire prior to the conquest of Orissa and Deccan, most likely during the reign of Shah Jahan, of Taj Mahal fame. Relief is shown pictorially. An elaborate title cartouche appears in the upper left quadrant. The map is embellished with images of tigers, elephants, caravans, and galleons.

There is much of interest. In particular, is the map detailed breakdown of the caravan network between Gujarat and Agra, between Agra and the desert outpost of Jaisalmer, and between Agra and the Silk Road center of Kabul. While the map does not show roads, for surely none as such existed at the time, it does show the network of towns, waystations and caravanserai built to support the bustling trade system.

There are two states of this map, the present example being the second state. The first state was issued c. 1638 by Henricus Hondius, and the second state a few years later in 1641 by Jan Jannson. With the exception of the imprint, the plates are identical, and a typical example of duplication between the competing firms, a trend that would continue throughout the 17th century.