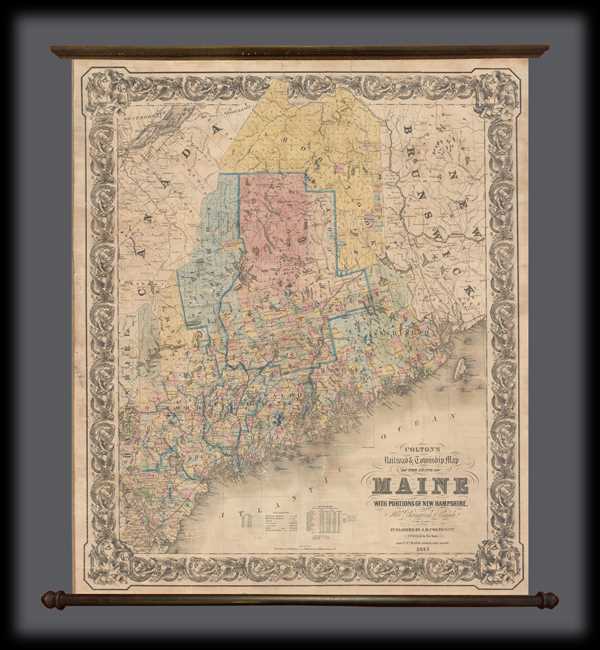 This is an 1855 J. H. Colton wall map of Maine. The map depicts the state of Maine and the surrounding region from Canada and New Hampshire to New Brunswick and from Aroostook County, Maine to the Atlantic Ocean. Highly detailed, Maine is divided first into counties (which are all labeled) and then into townships. Each township is either named or numbered, with the majority of the unnamed townships lying in the northern parts of Franklin, Somerset, Piscataquis, Penobscot, and Aroostook Counties. At this point in Maine's history, some townships were only known by their numerical identifiers of Range and Township.

Some townships, particularly in Aroostook County, some of the townships are labeled as 'grants', such as 'Grant to Portland Academy', or 'Grant to Belfast Academy'. These grants have a very intriguing history, which goes back to education in colonial America. By 1647, a law was passed in Massachusetts stating that towns of one hundred families must have a grammar school. Eventually, the citizenry felt the need for higher education, so academies were established. By 1796, eleven academies had been established, and seven of them were in Maine. As a method of supporting the academies, land grants were made, most often in Maine. Whole and sometimes half townships were given to the academies, and the sale of the land would go to support them.

This map was produced by J. H. Colton and published in 1855.

Very good. Back on linen. Attached to rollers. Blank on verso. Add two inches to both height and width for dimensions with rollers.
Looking for a high-resolution scan of this?