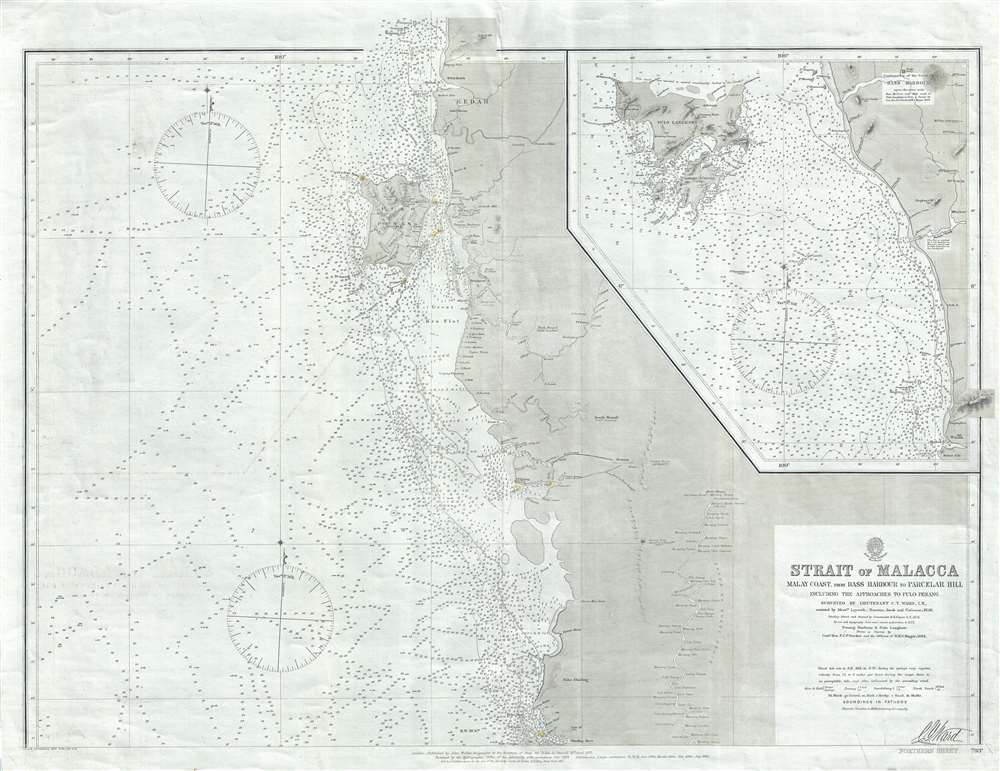 Rare 19th century nautical chart of Northern Malaysia and the Strait of Malacca.

A rare 1889 British Admiralty nautical chart or maritime map of the northern part of the Strait of Malacca, including the island of Penang (Georgetown). The map covers the western shore of the Malay Peninsula from Kedah to the mouth of the Dinding River, in modern day Perak. An inset on the upper right continues along the coast northward to include the Andaman Sea archipelago of Langkawi, known as the Jewel of Kedah. Pulo Penang, Malaysia's modern cay culinary capital, features prominently in the northern quadrants of the map. There is minimal inland detail in general, but he course of the Perak river is detailed as far north as Kuala Kangsar, Perak's royal town.

This map as firs published by John Walker, geographer to the Secretary of State for India on April, 15 of 1859. It was significantly revised and reissued by the Hydrographic Office of the Admiralty with corrections in October of 1874. Subsequent corrections followed in 1875, 1877, 1881, 1884, 1886, and, as here, 1889. Later editions also followed. All examples are based upon initial surveys conducted in 1858 by British Royal Navy Lieutenant C/ Y. Ward, and his assistants Laycock, Pearson, Jacob, and Cochrane. Updates from 1884 follow on the work of Commander F. C. Vereker on board the H.M.S. Magpie.

Today this chart is quite rare with the OCLC isolating no other examples. We have identified a single example at the National Maritime Museum in Greenwich, London.

National Maritime Museum, G257:1/18A.
Looking for a high-resolution scan of this?