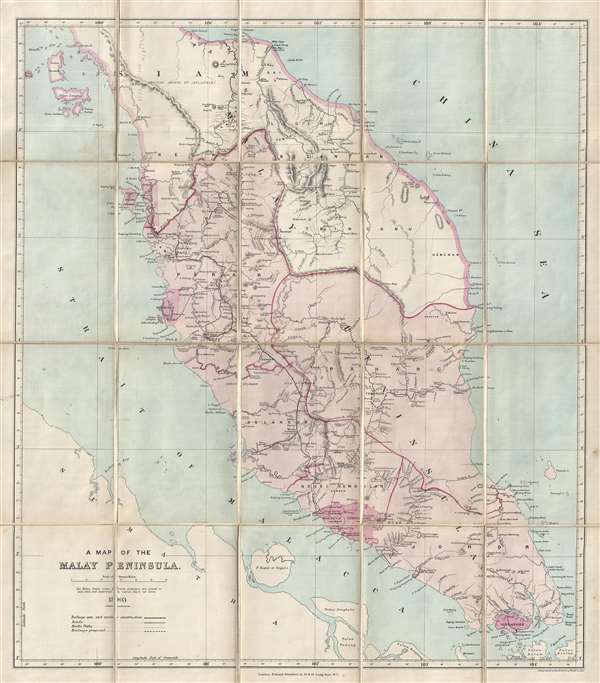 Scarce map of the Malay Peninsula and the FMS.

This is a 1903 scarce map of the Malay Peninsula by Edward Stanford, including all of modern day Malaysia, Singapore, and parts of Thailand. The map extends form Ko Tarutao and Langkawi, south as far as Singapore and Sumatra, and from the Strait of Malacca to the South China Sea. The map identifies roads, rail lines, rubber plantations, riverways, geographical features, indigenous villages, and more. An area at the right of the map is outlined in manuscript yellow.

The map focuses on British sovereignty in the region, with areas of direct British Administration, including Pengang, Wellesley, Dindings, Malacca, and Sinapore appear in red. The Federated Malay States, including Selangor, Perak Negeri Sembilan, and Pahang, appear in Pink, denoting nominal British control. Surrounding areas to the north, administered by the Kingdom of Siam, are considered under the British 'Sphere of Influence.' Siamese power at the time extended well south of the current Thailand-Malaysia border to include Tringanu (Terengganu).

The 'Boundary claimed for Rahman' appears just east of Pulu Pinang (Penang) along the Tongkal Range. The Kingdom of Reman or Kingdom of Rahman was a landlocked traditional Malay kingdom established in the northern Malay Peninsula. It became one of the seven states of Persekutuan Pattani Besar (The Great Pattani Federation) between 1810 and 1902 and is thus reflected here.

The map illustrates the growing and sophisticated rail network the British were actively constructing throughout the Federated Malay States (F.M.S.). At the time of printing, the railway was actively from Butterworth (Wellesley), south to Ipoh, Telok Anson, Kuala Lumpur, and Port Dickson, just north of Malacca. Kuala Lumpuer, here identified aws Kwala Lumpur, is also named 'The Residency.' The 'Residency' referred to a colonial administrative system whereby the Sultan was assigned a 'Resident' advisor, at the time of publication William Hood Treacher, who served as the de facto ruler. At the time of issue, the Malay peninsula was one of England's most profitable colonies, supplying nearly 55% of the world's supply of Tin.