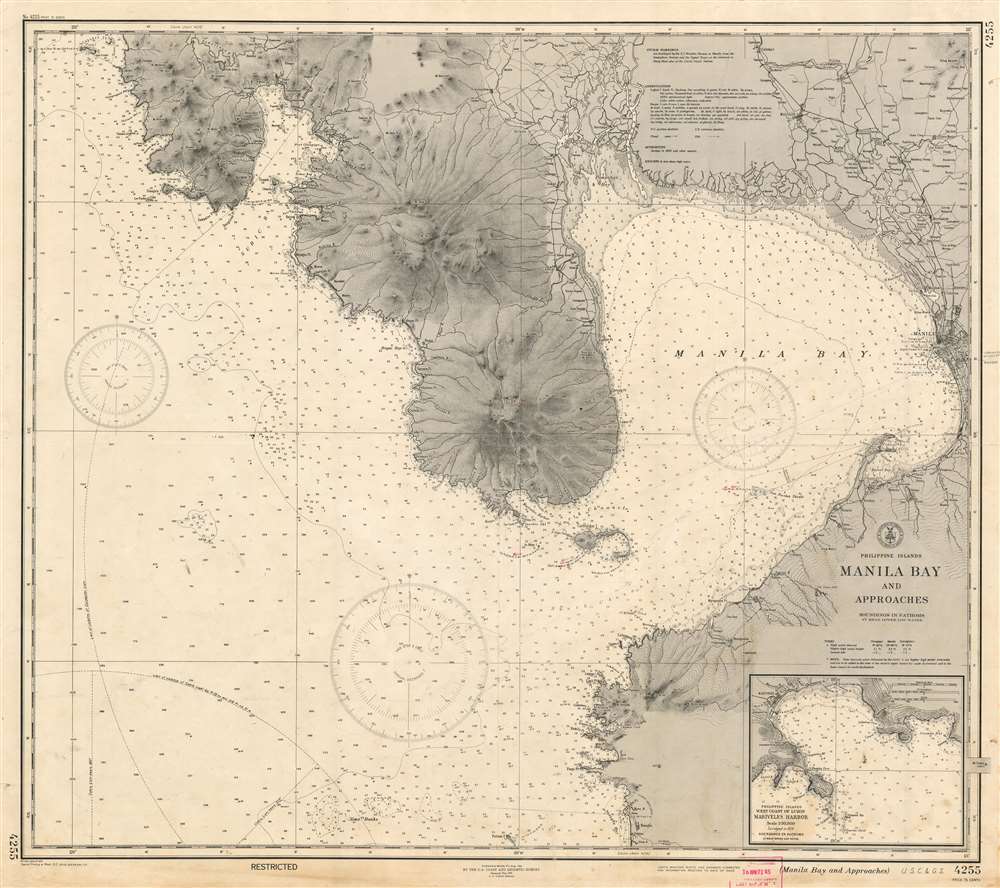 This is a 1944 U.S. Coast and Geodetic Survey nautical chart or maritime map of Manila Bay in the Philippines. Likely published for MacArthur's 1945 campaign on Luzon, a red stamp along the bottom border dated April 1945 from the Hydrographic Office of the Navy Department suggests that this map played some role in the Philippine Campaign. The map depicts the region's coastal areas in detail, with river mouths, settlements, and roads among the highlighted features. The Bataan Peninsula's topography is also illustrated, as are some settlements and roads further inland from Manila itself. Myriad depth soundings populate the bay, allowing for much more confident navigation. Corregidor Island, where MacArthur sheltered during the Japanese invasion of 1941-42, sits at the mouth of Manila Bay and is depicted in detail. Red manuscript notations mark three beacons that were relit by the Americans after liberating the area from the Japanese.

Launched on October 20 of 1944, the Philippine Campaign was a World War II joint American and Filipino military operation intended to liberate the Philippine Islands from occupying Imperial Japanese forces. The Japanese Army overran most of the Philippines during the first half of 1942, retaining it for the subsequent two years. American General Douglas MacArthur began the campaign by announcing on Philippine radio, 'This is the Voice of Freedom, General MacArthur speaking. People of the Philippines: I have returned.' The campaign progressed rapidly, driving the Japanese out of one island after another. Although by this time, the Japanese were clearly losing the war, they gave no sign of capitulation and refused to surrender. During the campaign, Japan suffered nearly half a million casualties compared to only about 50,000 Americans. The campaign continued until Japanese forces in the Philippines were ordered to surrender by Tokyo on August 15, 1945, after the dropping of atomic bombs on Hiroshima and Nagasaki.

This chart was originally published by the U.S. Coast and Geodetic Survey in August 1940 in Manila. It was then revised several times, with this edition published in Washington, D.C. in 1944. We have been unable to locate any other examples, but with the Navy Department stamp and the manuscript notations, this piece is likely one of a kind.

Very good. Exhibits some toning and soiling. Closed margin tears professionally repaired on verso.
Looking for a high-resolution scan of this?