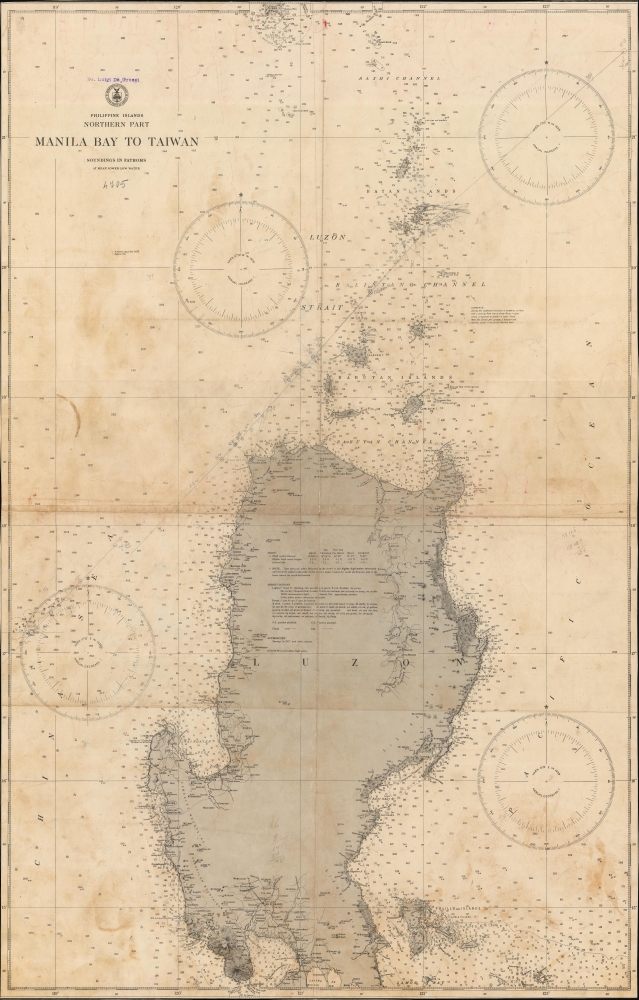 A U.S. government nautical chart of Luzon published only a few years before the Japanese invasion of the Philippines.
$850.00

This is a 1938 U.S. Coast and Geodetic Survey nautical chart or maritime map of Luzon in the Philippine Islands. The map depicts the region from the China Sea to the Pacific Ocean and from extreme southern Taiwan to Manila and Manila Bay. Highly detailed, myriad depth soundings are indicated throughout. Locations all along the coast of Luzon are labeled, such as mountains, towns, capes, and points. Manila and Corregidor Island are both identified and would soon become foci for the Pacific War only a few years after this map was published. The Bataan Peninsula, another site associated with the Japanese invasion and occupation during World War II, however, is not labeled. Numerous islands are labeled all along the coast of Luzon and north to Taiwan, including the Polillo Islands on the eastern side of Luzon not far from Manila, and the Babuyan Islands and Batan Islands in the Luzon Strait. Notes commenting on currents, tides, and abbreviations used on the map are included.

This map was created by the U.S. Coast and Geodetic Survey and published in 1938. Only one example is cataloged in the OCLC, and is part of the collection at Stanford University.