1706 de La Feuille Map of the World on Hemisphere Projection 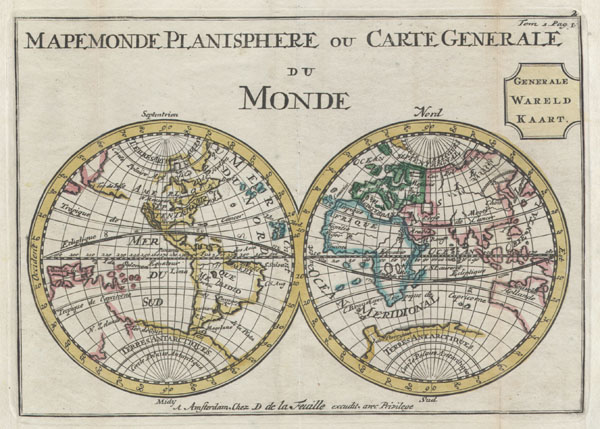 1706 de La Feuille Map of the World on Hemisphere Projection

A very scarce later, c. 1706, edition of a map of the world on a hemisphere projection first issued by Daniel de La Feuille in 1702. Much of the coastlines are plotted conjecturally at best. Features a massive California in Island form. Further north the American Northwest Coast is blank suggesting though not specifically detailing a Northwest Passage. Antarctica (Terres Antarctiques) seems to merge into the incomplete line representing New Zealand's eastern coast. The coastline of eastern Australia is largely indistinct and undefined. In Asia the Great Wall of China is drawn in and Japan is labeled though only loosely defined. In Polynesia, the Solomon Islands appear but no other island groups are identified. This map was originally prepared for inclusion as chart no. 2 in the 1702 edition of De la Feuille's Atlas Portatif. This particular map is from the 1706 reissue as indicated by the addition of the Dutch 'Generale Wareld Kaart.' to the title.