1946 Hoffman Anthropological Map of the World 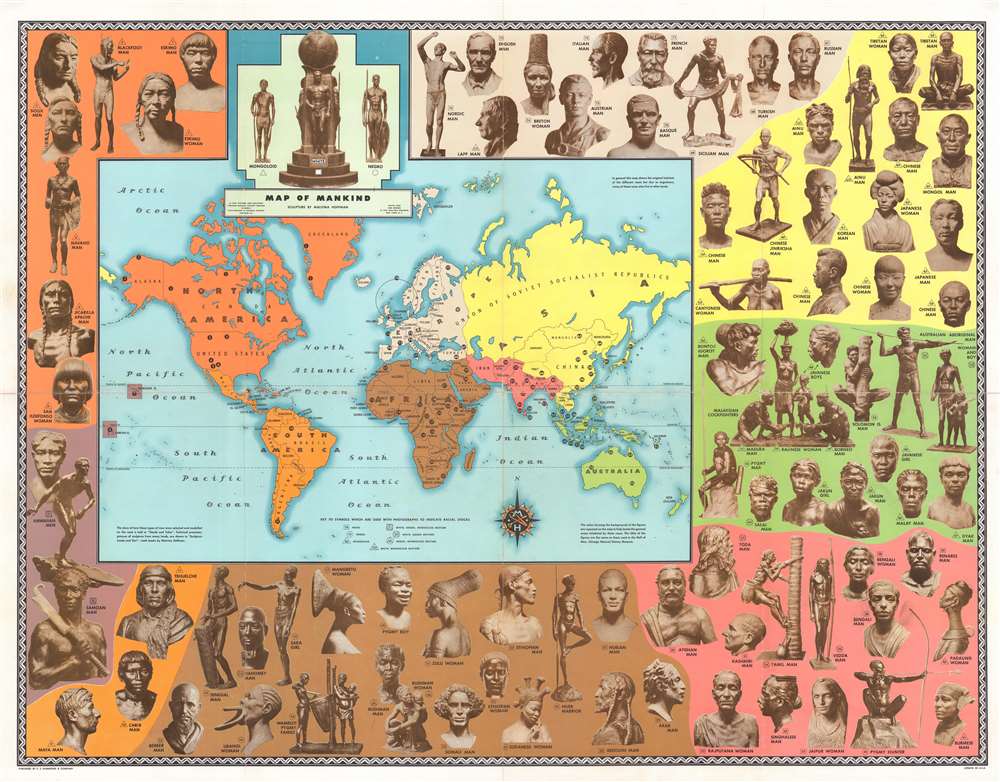 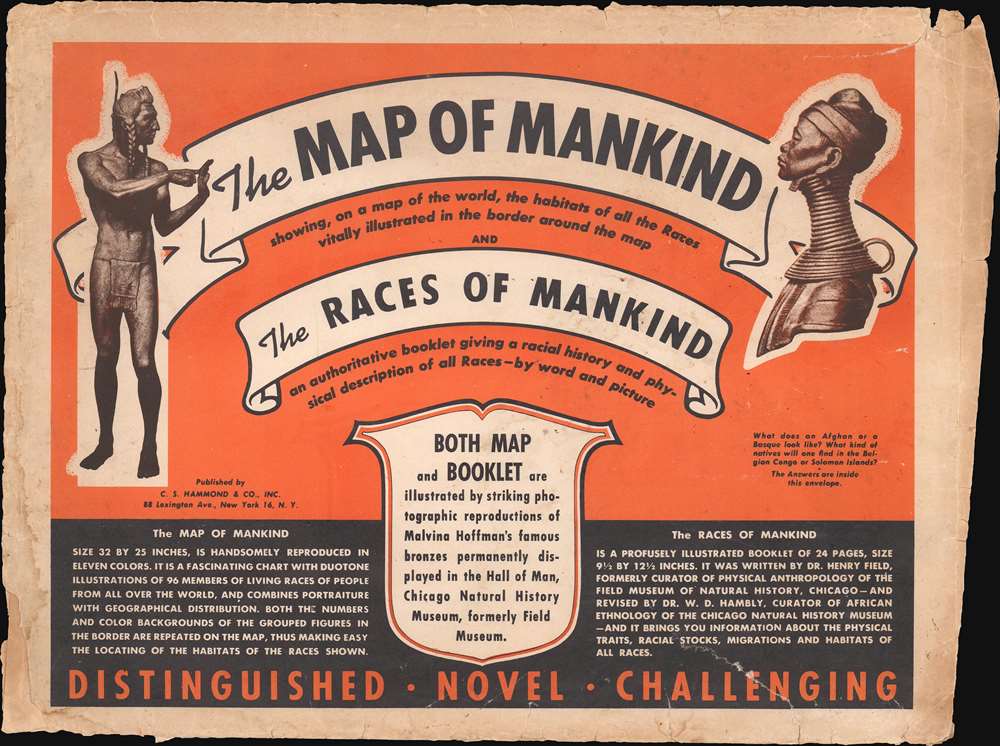 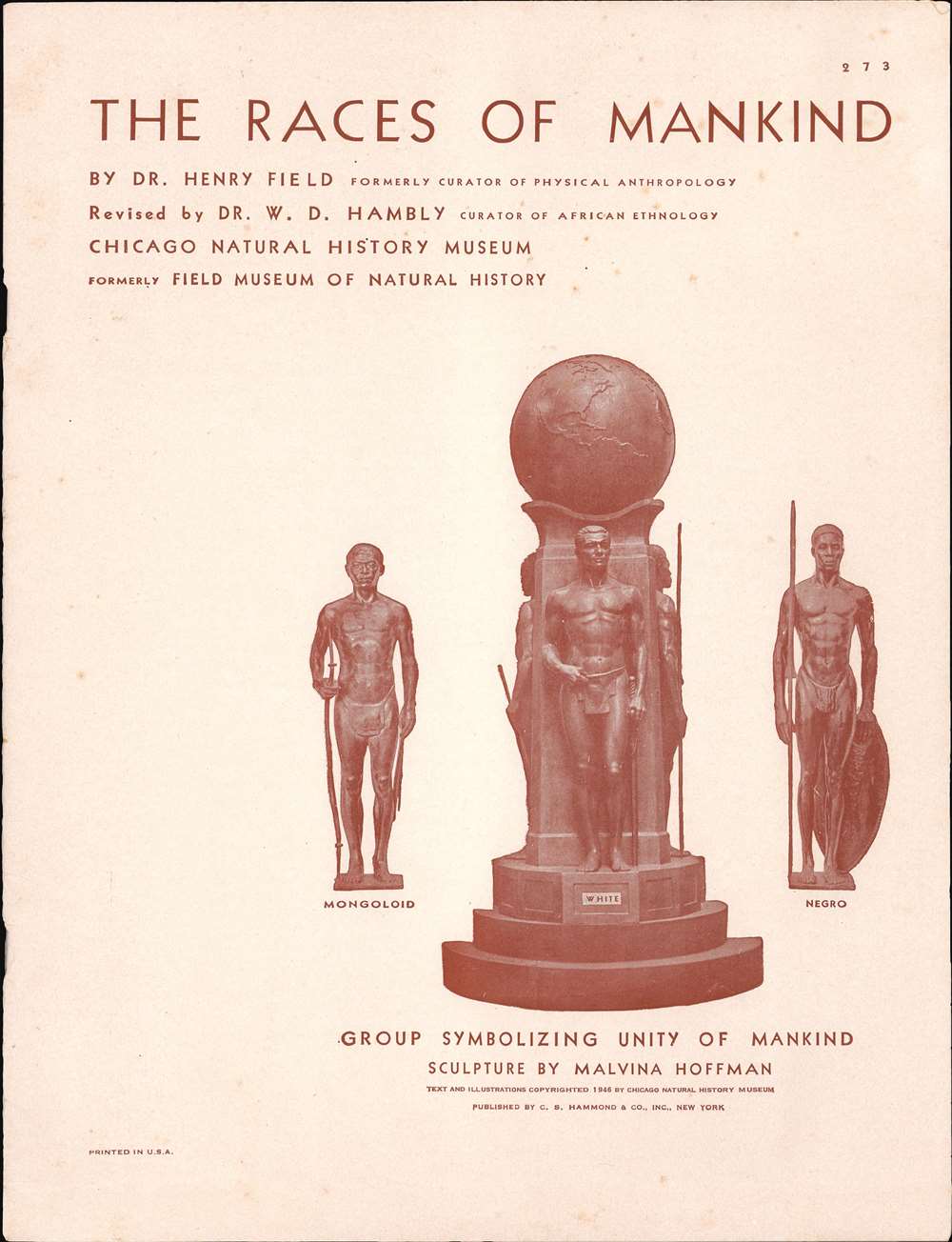 1946 Hoffman Anthropological Map of the World

This is a 1946 Malvina Hoffman and C. S. Hammond map of the world illustrating the 'races of mankind'. The map of the world is surrounded by seventy-seven of Hoffman's bronzes from her Races of Mankind series, created for Chicago's Field Museum. Colors highlight different geographical regions and group the sculptures, associating race with geography.

In the early 1930s, the Field Museum, under Stanley Field (1875 - 1964) himself, commissioned Malvina Hoffman (1885 - 1966) to create 'races of the world' sculptures for a new anthropology exhibition. The Field Museum originally proposed painted plaster molds, but Hoffman persuaded them to commission the works in bronze. Over the subsequent five years, Hoffman traveled the world meeting, observing, and creating likenesses of different peoples. In the end, the series included 104 sculptures: 27 life-size, 27 busts, and 50 heads. These were installed in the Hall of Man at the Field Museum in 1936. They remained on display for over thirty years until deinstalled in 1969, at the height of the Civil Rights Movement. In 2016, the Field Museum restored fifty of Hoffman's sculptures, displaying them as part of a new exhibition, Looking at Ourselves: Rethinking the Sculptures of Malvina Hoffman. In this exhibition, organizers emphasized nuance and individuality. They replaced the generic original labels with correctly identified ethnic groups and, where possible, identified the individual models by name.

When originally commissioned in the 1930s, Field and the other scholars at the Field Museum wanted these sculptures to educate their visitors on race. In her own words, Hoffman wanted her works 'to illustrate the dignity and individuality of each of her subjects'. Today, our understanding of race has changed, but the consequences of the racial ideologies that originally spawned these works remain. For an in depth look at this series of sculptures Races of Mankind: The Sculptures of Malvina Hoffman by Marianne Kinkel (U. of Illinois Press, 2011) explores their history.

This map was created by Malvina Hoffman and published by C.S. Hammond in 1946. The map is accompanied by supplementary explanatory material. Fifteen examples are cataloged in OCLC and are part of the institutional collections at the New York Public Library, Yale University, Harvard University, the Smithsonian Institution, the Osher Map Library at the University of Southern Maine, the University of Illinois at Urbana Champaign, and the University of Chicago, among others.

Malvina Cornell Hoffman (June 15, 1885 - July 10, 1966) was an American author and sculptor, renowned for her life-size bronze sculptures of people. Born in New York City, Hoffman was homeschooled until the age of ten and then attended elite private schools in Manhattan. While still in school, she attended night art classes at the Woman's School for Applied Design and the Art Students League of New York. She began seriously studying painting in 1906 and became an assistant to sculptor Alexander Phimister Proctor in 1907. Following her father's death in 1910, Hoffman and her mother moved to Paris (after visiting London and Italy) where Hoffman continued her art education. Her goal was to study under the famed sculptor Auguste Rodin, and after five unsuccessful attempts, was accepted as one of his students. Mother and daughter lived in Paris until the outbreak of World War I in 1914. During World War I, Hoffman joined the Red Cross and became an outspoken advocate for the refugee crisis in Serbia. She traveled to Serbia at least once during the war. During the interwar years, Hoffman's career continued to grow. In 1929, she received a commission from Stanley Field, the head of the Field Museum of Natural History, to create anthropologically accurate sculptures of peoples throughout the world. Over the course of five years, she traveled the world in search of models, and produced 104 sculptures: twenty-seven life-size, twenty-seven busts, and fifty heads. This impressive (although misguided) body of work was displayed in the Hall of Man at the Field Museum from 1936 until 1966, when it was taken off display. During World War II, Hoffman again served in the Red Cross and raised money for the Red Cross and national defense. She continued her support of Serbia (then part of Yugoslavia) during World War II as well. She continued making work for the rest of her life and her pieces are part of the permanent collection at the Metropolitan Museum of Art, the Smithsonian American Art Museum, the Harvard Art Museum, and numerous others. She married Samual Bonarius Grimson on June 4, 1924. They divorced in 1936 amid speculation the divorce was caused by Hoffman's affair with the ballerina Anna Pavlova. Hoffman never remarried. She died of a heart attack in her Manhattan studio on July 10, 1966. Learn More...