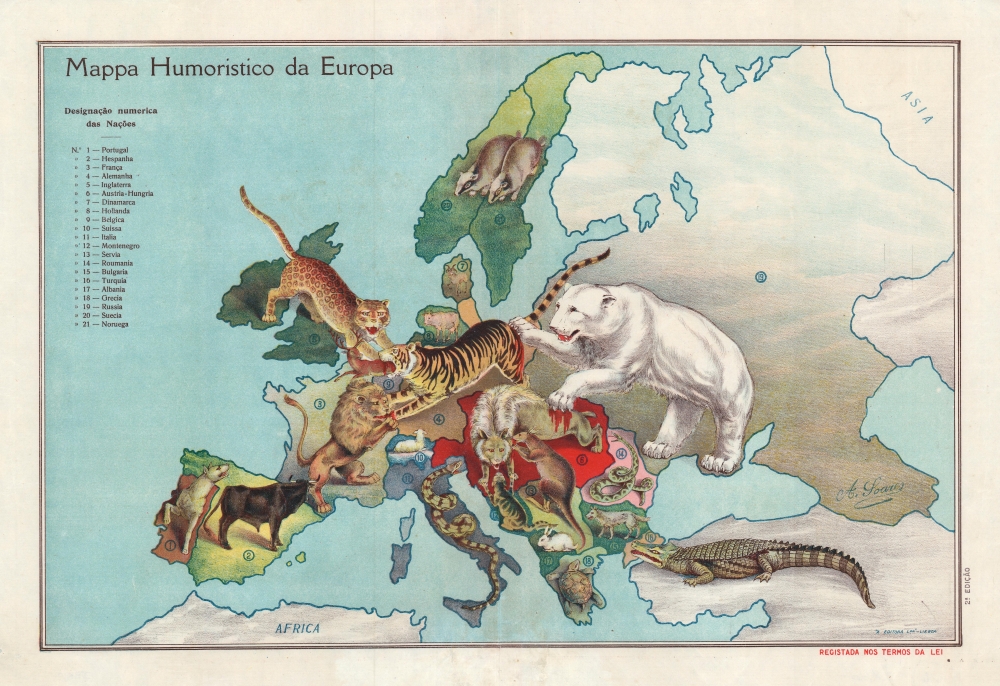 This is a rare, attractive 1914 António Soares chromolithograph map of Europe satirizing the early stages of the World War I. Such maps had been popularized going as far back as the mid-19th century, with notable examples produced to comment on conflicts such as the Franco-Austrian War, the Crimean War, the Franco-Prussian War, and the Russo-Japanese war; the Great War did not therefore escape this treatment. Produced for a wide audience, such maps were intended to present the relevant conflicts clearly and entertainingly. The present example uses a zoological theme to outline the early explosion of the cataclysm of WWI.

The players in the conflict - both active and passive - are represented by animals, which are numbered corresponding to a key. The aggressor nations are portrayed as predators. A wolf, Austria Hungary, (6) faces off with wildcat Montenegro (12) while Serbia (13, a Kangaroo) jumps in to bite the wolf in the neck. Germany, a tiger, (4) has already devoured half of the Belgian stag (9) despite Leonine France (3) having met Germany at the border and bloodied her paw. England, a leopard (5) belatedly jumps in to join the fight. Austria and Germany having presented her their backs, Russia, (19, inevitably a bear) takes advantage and bloodies them.

The author's neutral home Portugal (1) is presented as a hound , who barks but does not bite. Neighboring Spain (2), also neutral, is a bull: unbloodied but watching France closely. The Danish goat and the Dutch cow (7 and 8 respectively) observe Belgium's fate and stay put; Switzerland, a lamb (10), has not even risen to its feet. Italy, a serpent (11) watches Austria/Hungary for an opportunity to strike - as does the coiled Romanian snake (14.) Neither the Bulgarian dog (15) nor the Turkish crocodile have entered hostilities, but appear eager to: the Albanian rabbit (17) and the Greek turtle appear inclined to sit them out. The twin honey badgers of Norway and Sweden (20, 21) huddle together defensively, and nobody seems to want to engage them anyway.

Soares produced this map in 1914, and evidently it sold with sufficient success that a further edition was warranted - though marked as such, no date is appended, but we estimate a date of 1916. No examples of this second state are catalogued in OCLC and a sole copy of the 1914 edition is held at the British Library.

António Soares (September, 1894 – July, 1978) was a Portuguese modernist painter, caricaturist, architect, decorator, and set designer active during the early and middle 20th century. Soares was born in Lisbon and had no formal artistic training. He began his career as an illustrator, producing book covers, posters, caricature maps, and announcements, as well as working with magazines such as Ilustração, Magazine Bertrand and ABC. His work is generally modernist and includes caricature with a focus on worldly themes. Later in his career he began to focus on larger painting, murals, and even architectural decoration. Although little known today, he was well respected in his day. He won the Grand Prix at the Paris International Exposition in 1937, received the Columbano Prize twice at the SPN / SNI Modern Art Exhibitions (1935 and 1948), in 1958 was conferred the rank of officer of the Ordem Militar de Sant'Iago da Espada, and in 1962 received the Diário de Notícias Prize. Learn More...