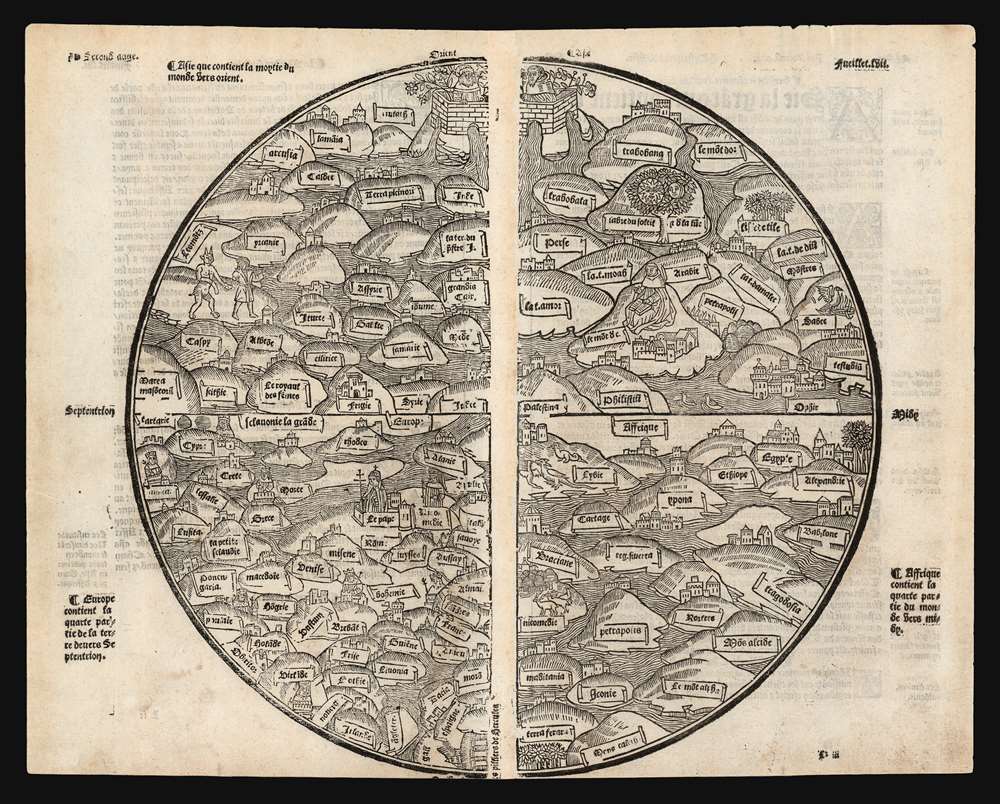 Rare Printing of a Medieval Mappamundi.

A rare, bold example of the only medieval mappamundi or World Map available to the collector. The anonymous woodcut first appeared in the 1491 Jean Dupré Lyons printing of the Mer des Hystoires. It is derived from the 1475 world map inWelteltchronik Rudimentum Novitiorum (World Chronicle for Novices), a history penned by an anonymous clergyman but published by Lucas Brandis. The book's world map and its map of the Holy Land were described by Shirley as 'the first printed maps to try and show land forms and countries in topographical relation to each other.' The Rudimentum Novitorum, was a history of the world intended for novice monks. Consequently the maps included were not for travel so much as supporting the symbolic and moral elements of monastic education. The 1475 map from which the present map is derived is itself only predated by one other printed map, the 1472 Isidorus T-O map, and in terms of orientation and general structure these maps do share some commonality, but the mappamundi as a form is very different in content and purpose to the schematic T-O map. At the same time, mappamundi such as this would stand in sharp contrast to the systematic, mathematical maps produced according to the rules and conventions of Ptolemy which would form the underpinning of modern geography. A T-O map was a visual diagram for understanding the three parts of the known inhabited world in relation to each other, but contained no information about those places. Ptolemy's maps represented an effort to calculate the actual locations of specific places in the inhabited world, or oikoumenē, and to mark them on a graph approximating a conic section of the globe. The mappamundi would attempt no such precision, but would within its limits name the parts of the known world deemed most important - particularly to the map's Christianized context.

Roots in the T-O Map

The best known example of a T-O map is the 1472 printed map of Isidore of Seville. It is best described as a circle, representing the ocean sea that surrounds the known world; this was divided by one horizontal line, representing the Don River (to the left) and the Nile (to the right). The area above this line represents Asia. The area below the line is itself bisected with a line signifying the Mediterranean Sea; the lower right hand quarter thus created is Africa, and the lower left quarter is Europe. Hence the T-O map is truly 'oriented,' with east at the top, west to the bottom, and north to the left. The Isidorus additionally assigns the three lands to the sons of Noah: Ham, Shem and Japheth. Other manuscript iterations of the T-O would also mark the presence of Jerusalem at the center, but for the medieval European the location of that city at the juncture of the waters would be assumed.

The Mer des Hystoires mappamundi, first, shares the same orientation as a T-O: at the bottom of the circle are the Pillars of Hercules at the mouth of the Mediterranean; at the top is the Garden of Eden, surrounded by walls with great rivers flowing from it. The Don, Nile and Mediterranean are not named but the rivers can be seen weaving amongst the stylized hills used to differentiate lands. A cursory scan of the toponomy will quickly reveal that spatial accuracy was not important here, but even so the locations of known places can show the surprisingly narrow scope of the map. The extreme north of the map (at far left) is marked with Tartaria, but also the 'Marea Masoneorum' - a misprint of 'Mare Amazoneum,' the Sea of Amazons, located near Scythia as per the 5th century BC historian Herodotus. Nothing in Europe further north than Muscovy appears. The southern limits of the map show Sabea, in ancient geography a principal city of Yemen in Arabia Felix, and the legendary city of Ophir (the source of the gold with which King Solomon built The Temple).

In addition to the fortifications surrounding the Terrestrial Eden and Ophir, other important cities are shown as fortresses, such as Rome and the Papal Palace, and the famous monastery on Mount Carmel. There are also depictions of fantastic creatures: a phoenix appears near Sabea and dragons can be seen near the middle of the map between Libya and Palestine. In northern Asia, the Devil is shown in speech with a person whose hat may actually be a halo: it may be a representation of the Devil's temptation of Christ on the 'exceeding high mountain' displaying 'all the kingdoms of the world, and the glory of them.' In the southeastern quarter of the map can be found the Tree of the Sun and the Moon, which (according to the fictional 4th century Letter of Alexander to Aristotle) Alexander the Great visited, and indeed spoke with.

The first printed iteration of this map, which was published in 1475, in the chronicle Rudimentum Novitorum is vanishingly rare. We are only aware of four examples appearing on the market in the past 40 years. The first edition of this example was printed in Lyons in 1491 to appear in the Mer des hystoires. It remained in print as late as 1555. The typography surrounding this example is consistent with others dated between 1543 and 1555, printed in Paris by Nicolas Couteau. We see only one example of the map, in its 1543 edition, catalogued in OCLC at the National Library of Israel.

Lucas Brandis (before 1450 - after 1500) was a German printer and typographer of the incunable period/ He was educated at Leipzig University, though his apprenticeship in the printing trade is unknown, but he would begin printing under his own name in Merseburg with his first dated work appearing in 1473. At the end of that year he began work on the work for which he is best known, the 474-sheet Weltchronik Rudimentum novitiorum, which he completed in 1475 - a history of the world for the education of Novice Monks. He also published breviaries, psalters and theological works such as Josephus' De bello Judaico Not atypical of early printers, his shop was not a financial success and he would go on to work as a type caster for printer Bartholomäus Ghotan. His lack of financial success seems to have had an effect on his historical traces, which are practically nonexistent after this time. His last dated printed work comes from the year 1499; his last appearance in the historical record was in Lübeck court records ordering him in 1500 not to leave town until his debts were settled. Learn More...


Jean Dupré (fl. 1481 - 1488) was a French publisher active in Paris and Lyon. He was notable for avoiding the re-publication of classical text, in favor of producing deluxe editions of modern works for a popular market. Learn More...


Nicolas Couteau or Cousteau (active 1530-1550) was a Paris printer, possibly associated with Parisian bookseller and publisher Galliot du Pré. In addition to having produced editions of the Mer des Hystoires, he seems to have published a number of French vernacular Bibles. Learn More...

Excellent condition. Very slight trimming to text at bottom at time of binding. Woodcut printed to two separate sheets and joined. Faint text show-through as always with this map.