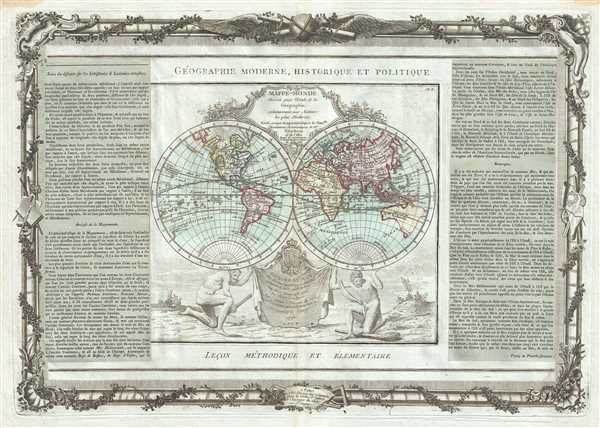 This is a beautiful example of Desnos and Brion de la Tour’s 1786 map of the world on a hemisphere projection.

North America, particularly the Northwestern quadrants, are exceptionally interesting and speculative. A magnificent inland sea, called the Sea of the West or in this case the Mer de L'Ouest, is presented in the northwestern part of the America. This body of water, alternatively called the Sea of the West or Baye de l'Ouest, was speculated by Philippe Buache and De l'Isle in the early 18th century based upon wishful thinking, American Indian stories, and the somewhat questionable 16th century explorations of Juan de Fuca. Here Brion gives the Mer de l'Ouest its fullest expression, though he specifically does not connect it to the factual network of lakes and rivers extending westward from the Hudson Bay.

South of the equator the shores of Australia or New Holland are speculatively mapped with a dotted line defining the southern and eastern portions continent. Van Diemen's Land or Tasmania is attached to the mainland, which itself includes New Guinea and parts of the New Hebrides.

The map includes a beautiful rococo style title cartouche in the top center and another cartouche at the bottom of the map, featuring the dedication and the coat of arms of France held up by Atlas and Hercules, on whose backs the hemispheres are supported. To the left and right of the map are paste downs of French text with remarks and description of the map. Surrounding the whole is an elaborate decorative border featuring floral arrangements, surveying tools, elaborate baroque scalloping, and a winged globe.