1787 Jaugeon / Desnos Wall Map of the World in Hemispheres 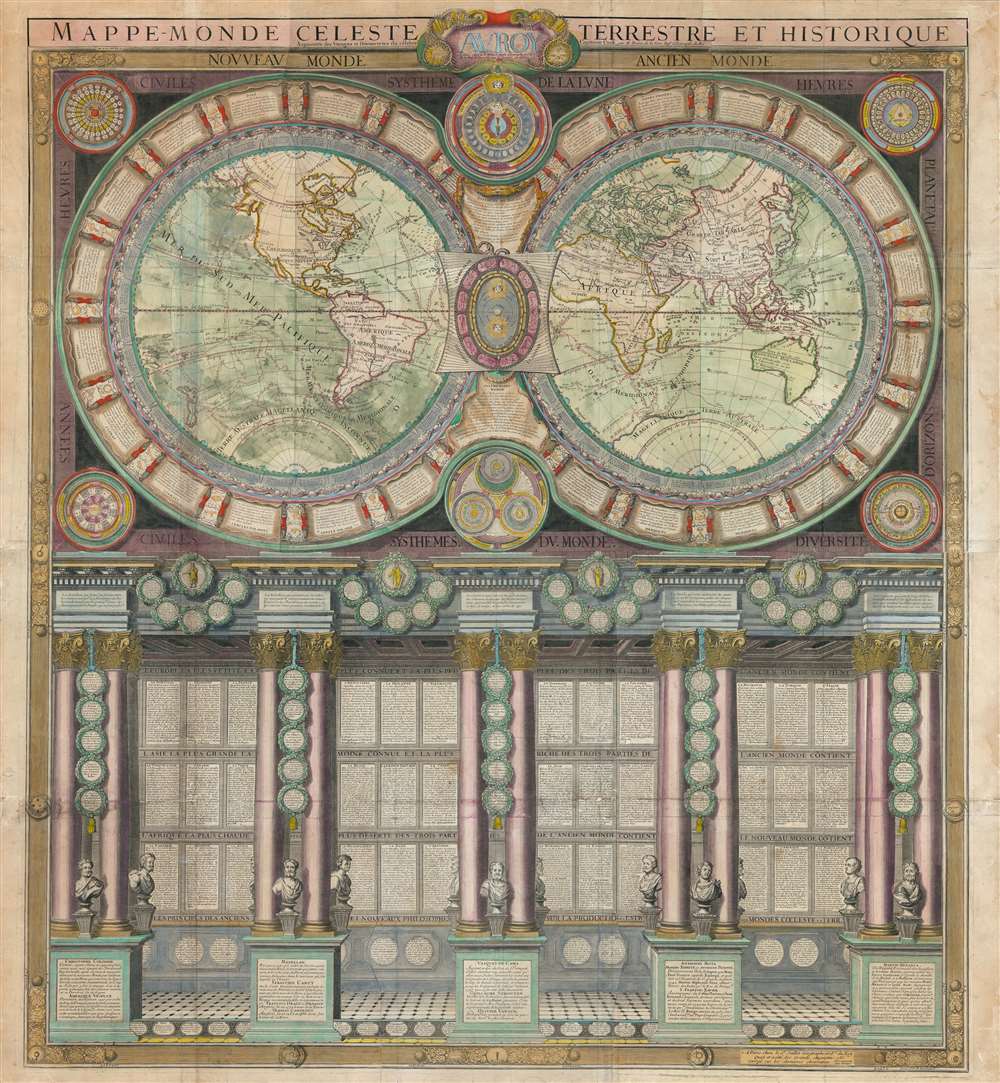 1787 Jaugeon / Desnos Wall Map of the World in Hemispheres

One of the most richly informative cartographic productions ever created.
$31,000.00

A stunning large format wall map of the world in six panels issued in 1786 by Charles Desnos and Nicolas Jaugeon. Described by map historian Rodney W. Shirley as 'a veritable compendium of a map,' this is one of the most richly informative cartographic productions ever issued. The map consists of a double hemisphere map projection surrounded by no less than 60 Aeoli windheads, astronomical data on constellations, cosmic systems, and other charts - intentionally placing the world in the context of the greater cosmos. Its elegant presentation conveys confidence in the human capacity to describe not only the Earth, but the cosmos itself. The double hemisphere map rests upon Corinthian columns, underscoring the classical foundations of western scientific thought, here augmented by new discovery. The unique, neo-classical motif is carried through to the bottom half of the engraving, where panels of text are set within a portico supported by Corinthian columns. Completing the illusion are a coffered roof and a patterned tile floor. At the base of the columns there busts and accounts of the great explorers, among them Columbus, Magellan, and Vasco de Gama.

The map here is significantly updated over earlier editions to reflect the discoveries of Captain James Cook - a watershed moment in cartographic history. All three of Cook's great voyages completed between 1768 and 1779 are noted. In North America the Pacific Northwest is beginning to take on recognizable form. Australia eastern coast is revealed, although Tasmania remains attached to the mainland. The borders of New Zealand are also clarified, and Antarctica appears for the first time. Nonetheless, there remain deep cartographic errors throughout, particularly in Asia and inland in Africa, South America, and North America. The Caspian Sea is still somewhat circular, the apocryphal Laguna de Xaraies appears in South America, and the interiors of Africa and American are mostly blank. Even so, this map exhibits a considerable advancement, in that previous generation cartographic speculation, used to fill in the map for want of actual exploratory data, has here been much reduced. Unlike the earlier editions, there is, for example, no Lake Parima (El Dorado) in South America, or Ptolemaic mapping of the Nile's sources in Africa.

This map was first published by Nicolas Jaugeon in Paris in 1688. Although few examples of the 1688 edition survive, it is likely that it featured only the double hemisphere map, not the extensive text and neo-classical imagery below. The map was most likely engraved by Jean Crépy (1660 - 1739), with new plates either engraved or modified by others for the different editions. It appears that the extensive lower portions of the map were engraved by Albert Jouvin de Rochefort (c. 1640 - c. 1710) for Alexis-Hubert Jaillot's (c. 1632- 1712) c. 1690 edition. Jaillot issued subsequent editions in 1718, 1730, and 1758. After Jaillot's death, his plates passed to Louis Charles Desnos (1725 - 1805), who hired Louis Brion de la Tour (1743 - 1803) to re-engrave the map portion of the chart to reflect the discoveries of Captain James Cook. The present example is the Desnos issue, of which there is only one state, 1786.

Nicolas Jaugeon (fl. c. 1680 - 1710) was a typographer, mathematician, and engraver active in Paris in the late 17th and early 18th centuries. Jaugeon is best known for the 1692 invention of the typeface Romain du Roi, which is best known today as Times New Roman. The typeface was revolutionary at the time as it abandoned the artistic principles of calligraphy to instead draft each letter on a uniform mathematical platform. The typeface was initially reserved for the French Royal Press, Imprimerie Royale, but was later adopted by others. Jaugeon was also a prominent and active member of the French Academy of Sciences. He cartographic corpus appears limited to a single, but spectacular, map of the work published in 1688. Another Jaugeon, Jacques, also appears to be associated with the development of Romain du Roi, and the two are often conflated as the same individual, suggesting further research into the elusive but important individual is required.


Albert Jouvin de Rochefort (c. 1640 - c. 1710) was a French cartographer and government official active during the second half of the 17th century. Rochefort is a little known figure who served as Treasure to the King of France at Limoges from 1675 to 1702. In this capacity he traveled extensively throughout France and Europe in General, publishing an account of his travels with the firm of Thierry, Louis and Claude Barbin Billain. He apparently also traveled extensively in Egypt, the Holy Land, and Turkey. He produced several important maps, most of which are on a massive scale, to illustrate his cardinal work, Le voyageur d'Europe, où sont les voyages de France, d'Italie et de Malthe, d'Espagne et de Portugal, des Pays Bas, d'Allemagne et de Pologne, d'Angleterre, de Danemark et de Suède. In 1672-5 Rochefort issued a monumental plan of Paris in nine panels, Paris et ses Environs followed by a smaller plan in 1697, Nouveau plan de Paris. Apparently a portrait of Rochefort is preserved in the National Library of France.