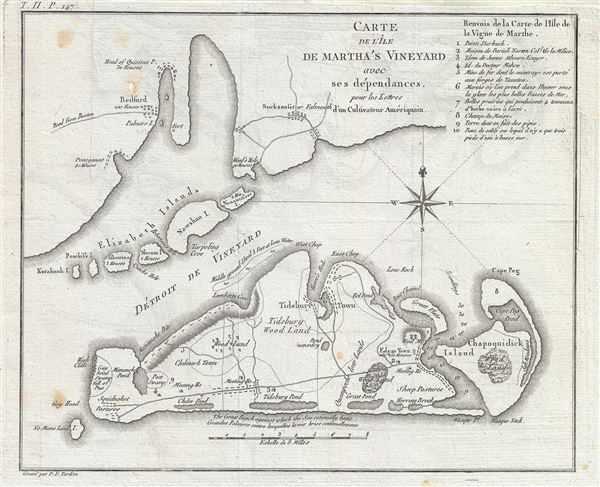 This attractive map by P. F. Tardieu is the earliest obtainable separate map of Martha's Vineyard. It covers Martha's Vineyard in full as well as parts of the adjacent Elizabeth Islands. The map extends northwards to include, vaguely, all of Buzzards Bay and southwards as far as Nomans Land Island, now a wildlife refuge. On the Vineyard, details include roads, natural features, towns and villages, and two meeting houses. Tardieu locates Edgartown, Tidsbury Wood, Tidsbury Town, Chappaquiddick (Chapoquidick), Eel Pond, Peat Swamp, Squidnoket Pastures, and Cape Pog Pond, etc. Although published in Paris for a French audience, most of the text is in fact in English. The exception is the title and a key in the upper right identifying 10 additional numbered locations. It was engraved in 1785 for publication in accompaniment of Michel Guillaume St. Jean de Crevecoeur's 1787 Lettres d'un Cultivateur Ameriquain (Letters of an American Farmer), a collection of essays describing American life in such bountiful language that it inspired a wave of French immigration.

Pierre François Tardieu (1711 - 1771) was a French engraver and mapmaker active in Paris during the middle part of the 18th century and a member of the large and prolific Tardieu family. Several members of the family established themselves as engravers, and, for over 200 years, the family produced works. Pierre Francois Tardieu was born around 1711 in Paris, son of Jean Tardieu. His uncle, Nicolas-Henry Tardieu, taught him the art of engraving. Pierre was a general engraver whose work was not limited to maps but also included historical and genre works. Many of his maps are extremely significant and include some of the finest French productions of the period. Tardieu had his office at Rue de al Corderie, Paris. Tardieu was married to Marie-Anne Rousselet (1733-1826), whose family included the engraver Gilles Rousselet and the sculptor Jean Rousselet. It is highly likely that Pierre Francois Tardieu was succeeded by Pierre Antoine Francois Tardieu, who is also possibly his son, as the latter continued to engrave under the P. F. Tardieu imprint well after the former's death. Learn More...