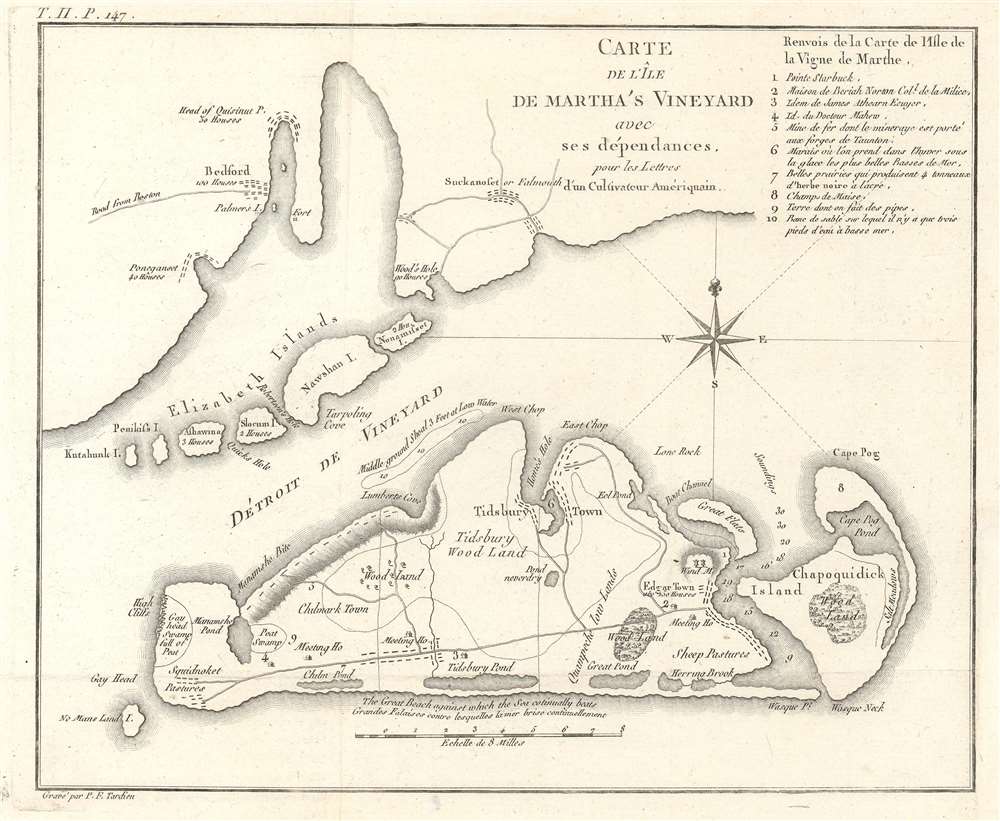 This small but important map by P. F. Tardieu is the earliest obtainable separate map of Martha's Vineyard, Massachusetts. It covers Martha's Vineyard in full as well as parts of the adjacent Elizabeth Islands. The map extends northwards to include, vaguely, all of Buzzards Bay and southwards as far as Nomans Land Island, now a wildlife refuge. On the Vineyard, details include roads, natural features, towns and villages, and two meeting houses. Tardieu locates Edgartown, Tidsbury Wood, Tidsbury Town, Chappaquiddick (Chapoquidick), Eel Pond, Peat Swamp, Squidnoket Pastures, and Cape Pog Pond, etc. Although published in Paris for a French audience, most of the text is in English. The exception is the title and a key in the upper right identifying 10 additional numbered locations.

Letters of an American Farmer

This map was prepare to accompany Michel Guillaume St. Jean de Crevecoeur's 1787 Lettres d'un Cultivateur Ameriquain (Letters of an American Farmer), a collection of essays describing American life in such bountiful language that it inspired a wave of French immigration to North America. Howes describes Crevecour's work as a 'description of American life of great influence in attracting European immigration in the post-revolutionary period. As literature unexcelled by any American work of the eighteenth century.

This map was engraved in 1785 by Pierre Francis Tardieu, whose imprint appears in the lower right. It was not published until two years later, in 1787, when the first French edition of Michel Guillaume St. Jean de Crevecoeur's 1787 Lettres d'un Cultivateur Ameriquain was issued. The map is a based upon a similar map issued in the 1783 English edition, Letters of an American Farmer, but it much more finely engraved reflecting Tardieu's mastery. There is also a similar map of Nantucket. Always desirable, these maps come rarely to the market.