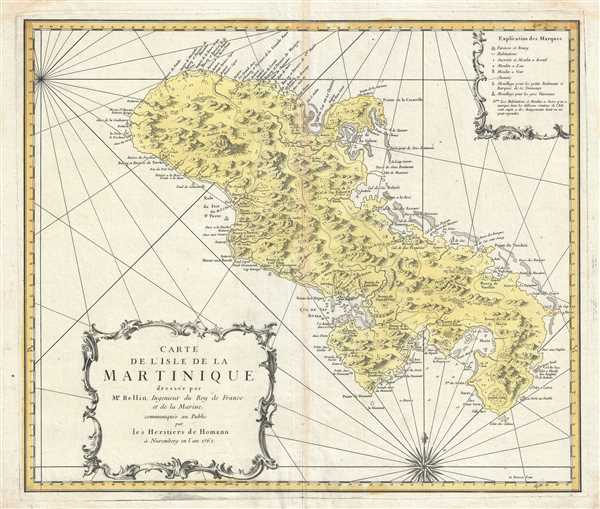 Map of Martinique drawn to capitalize on general interest generated by the events of the Seven Years' War.

This is a striking 1762 example of Homann Heirs’ beautiful map of the Island of Martinique in the Caribbean. Covers the entire island in exceptional detail with attention to the exceptionally varied topography. Based on the earlier work of Jacques-Nicolas Bellin (Carte Réduite De L'Isle De La Martinique, Paris, 1758), the map notes important towns, roads, rivers, anchorages, and beautifully rendered mountains. Some coastal features and depth soundings are also noted.

This map was doubtless published to capitalize on general interest in Martinique associated with the on-going Seven Years’ War (1756-63). Shortly before this map went to press British forces successfully invaded and seized control of Martinique. The island had substantial economic value as sugar colony and, along with its French sister island Guadeloupe (seized by the British in 1759), was returned to France in 1764, in token exchange for the larger and far more valuable British-seized former French colony, Canada.
Today Martinique, with its French Caribbean culture, lush rainforests, and stunning beaches is considered a jewel of the Caribbean.

A large and impressive title cartouche adorns the lower left quadrant while another cartouche in the top right features a reference key. Issued by the Homann Heirs firm in 1762.