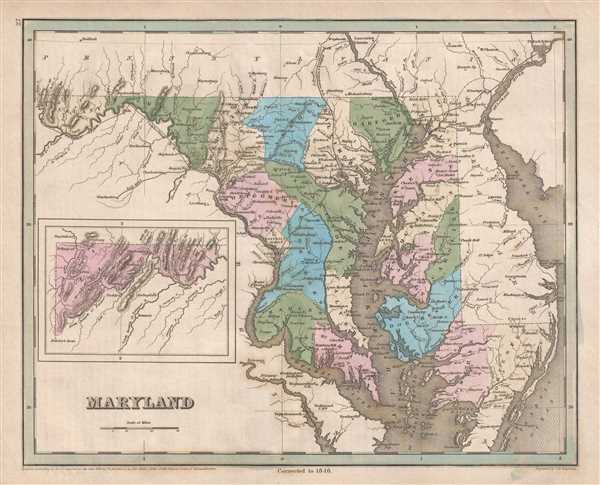 Illustrates the Baltimore and Ohio Railroad, which wouldn't be completed until 1851.

This is an 1846 Thomas G. Bradford map of Maryland. The map depicts the region from Cumberland, Maryland to Delaware Bay and from Pennsylvania to Virginia. An inset map situated in the lower left corner illustrates the entirety of Allegany County, Maryland. As is common among maps from Bradford's A Universal Illustrated Atlas, the transportation network in Maryland is presented in detail. The Chesapeake and Ohio Canal, which Bradford calls 'a gigantic project' connected Washington, D.C. and Cumberland, Maryland, a distance of 184.5 miles. The canal was not completed until 1850, meaning that it had not yet been completed when this map was printed. Used mainly for transporting coal from the Allegheny Mountains, the canal ran along the Potomac River and provided an alternative to the difficult navigation of the river. The Baltimore and Ohio Railroad, referred to as 'a bold enterprise' by Bradford, is illustrated and labeled here. The Baltimore and Ohio was created as a way for the city of Baltimore to compete with the Erie Canal, which served New York City. The goal was to connect the port of Baltimore with the Ohio River at Wheeling, West Virginia (then part of Virginia) and was still under construction at the time of this map's printing. The B and O had reached Cumberland, Maryland in November 1842. Other railroads illustrated and labeled here include the Baltimore and Susquehanna Railroad and the Baltimore and Philadelphia Railroad.

Within the state of Maryland, individual counties are labeled and shaded different colors to allow for easy differentiation. Numerous cities, towns, and villages are labeled, both within Maryland and in the surrounding region. These cities and towns include Baltimore, Annapolis, Cumberland, Washington, D.C., Dover, and Philadelphia. Both the Delaware and Chesapeake Bays are labeled, along with the Delaware, Susquehanna, and Potomac Rivers and a host of smaller rivers and creeks.