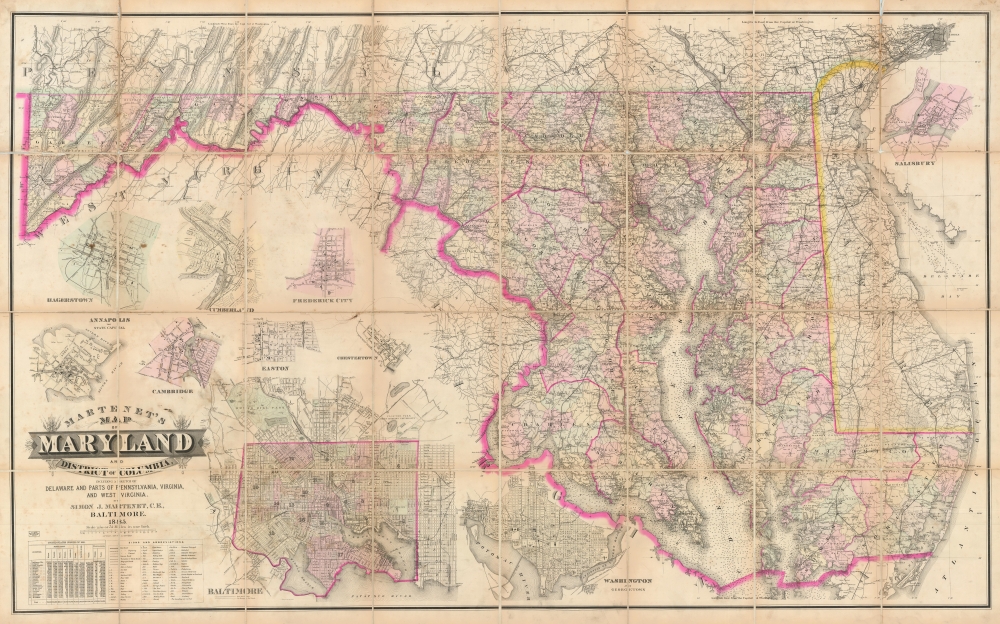 A remarkable 1885 large format sectionalized map of Maryland and Washington D. C. by Simon J. Martenet. The map covers all of Maryland and Delaware, as well as Washington D. C., with multiple insets including Baltimore, Hagerstown, Cumberland, Frederick City, Annapolis, Cambridge, Easton, and Chestertown. The represents the culmination of Martenet's mapmaking career, which he called 'A Beautiful Work.' When published, this map was considered the largest and best map of Maryland yet issued and was adopted by the State Legislature for administrative use.

This map was copyrighted by Simon J. Martenet in 1884 and issued in 1885. It follows on a similar map of Maryland issued in 1865, just after the Civil War, but is a new and heavily revised edition with a different title. According to firm records, the map was updated several times until the plates were destroyed in the Great Baltimore Fire of 1904. Nonetheless, we have found no surviving record of updated editions. The 1885 edition of this map, as her, we have found in just 3 institutions. The earlier version, 1865, is more common. Martenet considered the two editions completely separate works, despite their superficial similarity.

Simon Jonas Martenet (April 13, 1832 - November 6, 1892) was a Baltimore based map publisher, surveyor, and civil engineer active in the second half of the 19th century. Martenet went through the Baltimore public school system, graduating in July of 1847. He began his career in March of 1849, 2 years later. He trained as a surveyor working for the Baltimore city surveyor Thomas P. Chiffelle. From roughly 1853 to 1869 he served I the Baltimore City Militia. He began issuing maps around 1858, most of which consisted of city and state maps of Maryland. He joined the Society of Friends, the Quakers, in 1862. In 1867, he was elected Baltimore City Surveyor, taking over Chiffelle's role. He held this position on and off until 1879. Martenet died of a stroke in Baltimore in 1892. Martenet was a member of the Odd Fellows and Red Men fraternal orders. He lived at 208 East Lexington Street, Baltimore. The firm he founded, S. R. Martenet, remains in business today. Learn More...

Very good. The map is intact with some toning on old fold lines. Original linen backing is exceedingly brittle and reinforced here and there with archival tissue. Attached to restored binder with fresh linen.