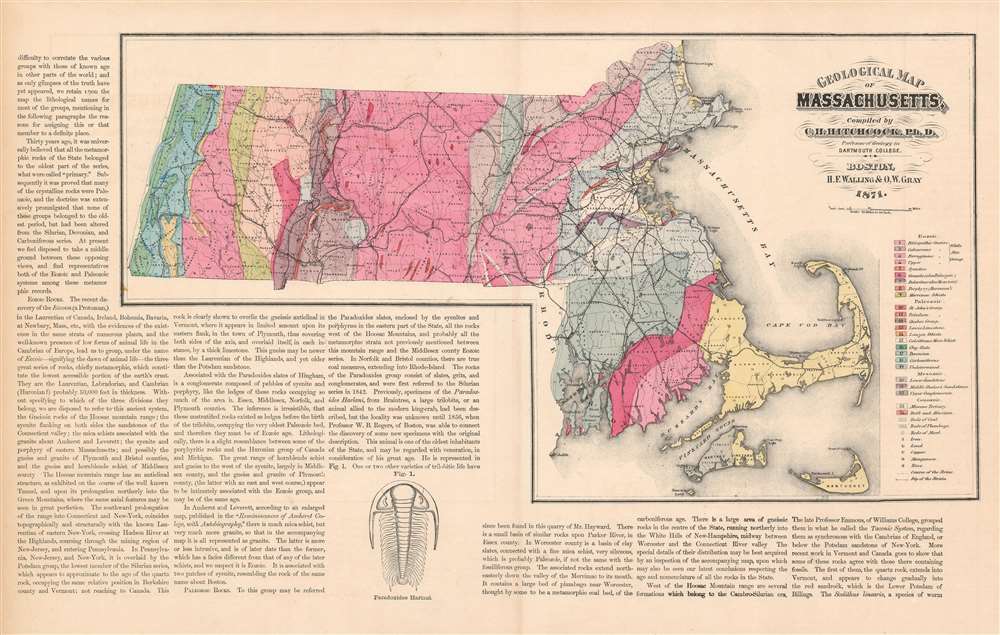 A Beautiful Map of Massachusetts Rich in Geological Data
$550.00

This is an attractive and richly informative geological map of Massachusetts, compiled by the geographer Charles Hitchcock and published by Walling and Gray in 1871. The map shows sources of iron, lead, copper, manganese and zinc; beds of coal, plumbago (not the flower, but rather an old term for graphite), and marl (an important limestone-based fertilizer) are marked as well. No fewer than 24 geological formations are identified and color coded to a key on the right-hand side of the map. These are classified by broad units of geologic time- Cenozoic, Mesozoic, and Paleozoic - and include also an archaic term, the Eozoic a term that has since been replaced with Precambrian, referring to the oldest period of Earth's history. According to Hitchcock's map, the Eozoic formations tend towards the portions of the state west of the Connecticut River valley, while the eastern parts of the state are characterized with more comparatively recent structures.

In addition to the map's extremely granular geological information, it shows the state's railroads in detail as well. While this may simply be ascribable to Walling and Gray's own deep resources of geographical data, it would be unsurprising for Hitchcock to have a thorough knowledge of the rails. Throughout the 19th century geology and paleontology were, as disciplines, closely aligned with the rail road companies, as there were fewer activities better suited to the study of rocks than surveys on behalf of the railroads. Still, geological maps of this standard were still relatively recent developments: William Smith's A Geological Map of England and Wales and Part of Scotland had been published in 1815, but the first systematic Geological survey of an American state - New York - was not published until 1842.

Charles Henry Hitchcock (August 23, 1836-November 5, 1919) was an American geologist. He was born in Amherst, Massachusetts to Edward Hitchcock (1793-1864), himself a professor of geology and natural theology at Amherst College, and Orra White Hitchcock, who illustrated much of his father's work. He was assistant state geologist of Vermont (1857-61), state geologist of Maine (1861-2), and New Hampshire state geologist (1868-78), during which latter tenure he produced the first set of detailed maps of the geology of New Hampshire.  He taught at Dartmouth College in from 1868 to1908, holding the Hall Professorship of Geology and Mineralogy. Learn More...


Henry Francis Walling (June 11, 1825 - April 8, 1889) was an American civil engineer, cartographer, surveyor, and map publisher active from the middle to late 19th century. Walling was born in Providence, Rhode Island. He studied / worked at the Providence Athenaeum before discovering a talent for mathematics and surveying. Walling took a position with Samuel Barrett Cushing, a Providence based civil engineer with whom he issued in 1846 a revision of James Steven's Topographical Map of the State of Rhode-Island. Walling established himself independently around 1850 and immediately began preparing a series of town plans focusing on Bristol County, near Providence. Buoyed by popular interest in his plans, Walling expanded his operations to Massachusetts where, by 1857, he had produced no less than 50 town plans. Apparently Walling's business model involved a contract with town officials to produce a certain number of maps after which he acquired the right to print and sell additional copies on his own account. This work eventually led to Walling's appointment as Massachusetts "Superintendent of the State Map", a designation that begins appearing on his maps around 1855. While Walling's work focused heavily on city and county maps, he did successfully publish three scarce state maps: Maine, Vermont, and Rhode Island. In 1856 Walling relocated his headquarters to New York City where he had better access to quality lithographers. The Civil War proved difficult for Walling and diminished sales may have forced him into a partnership with Ormando W. Gray, with whom he published numerous state, county, and national atlases in the 1860s and 1870s. Around 1880 Walling took a post with the U.S. Coast Survey with whom he worked on various charts until requesting a transfer in 1883 to the newly formed U.S. Geological Survey. Walling remained with the Geological Survey until his untimely death of a heart attack in April of 1889. Learn More...