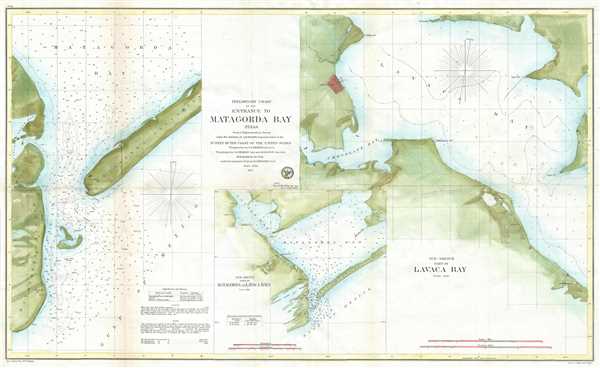 This is an uncommon 1857 U.S. Coast Survey nautical chart or maritime map of Matagorda Bay and Lavaca Bay in Texas. This sheet depicts three different sections of the Texas coast. The primary map, occupying the left portion of the sheet, details the Entrance to Matagorda Bay. Matagorda Island and Matagorda Peninsula are illustrated in excellent detail, noting the Decros Point Beacon. The second map, situated on the right, depicts Lavaca Bay, including wonderful detail of Lavaca City (or as it is known today Lavaca Port). A third smaller map, occupying some space between the two larger ones, illustrates both Matagorda and Lavaca Bays in relation to one another. Countless depth soundings are indicated throughout the three maps. Notes on tides, lighthouses, and sailing instruction are included next to the smaller map of Matagorda and Lavaca Bays.

The Triangulation for this survey was completed by S. A. Gilbert. The topography is the work of S. A. Gilbert and M. Seaton, and the hydrography was accomplished by a party under the command of J. C. Febiger. The whole was compiled under the cirection of A.D. Bache, Superintendent of the Survey of the Coast of the United States, and one of the most influential and prolific figures in the early history of the U.S. Coast Survey.