1830 Perrot Comparative Charts of the World's Men and Women 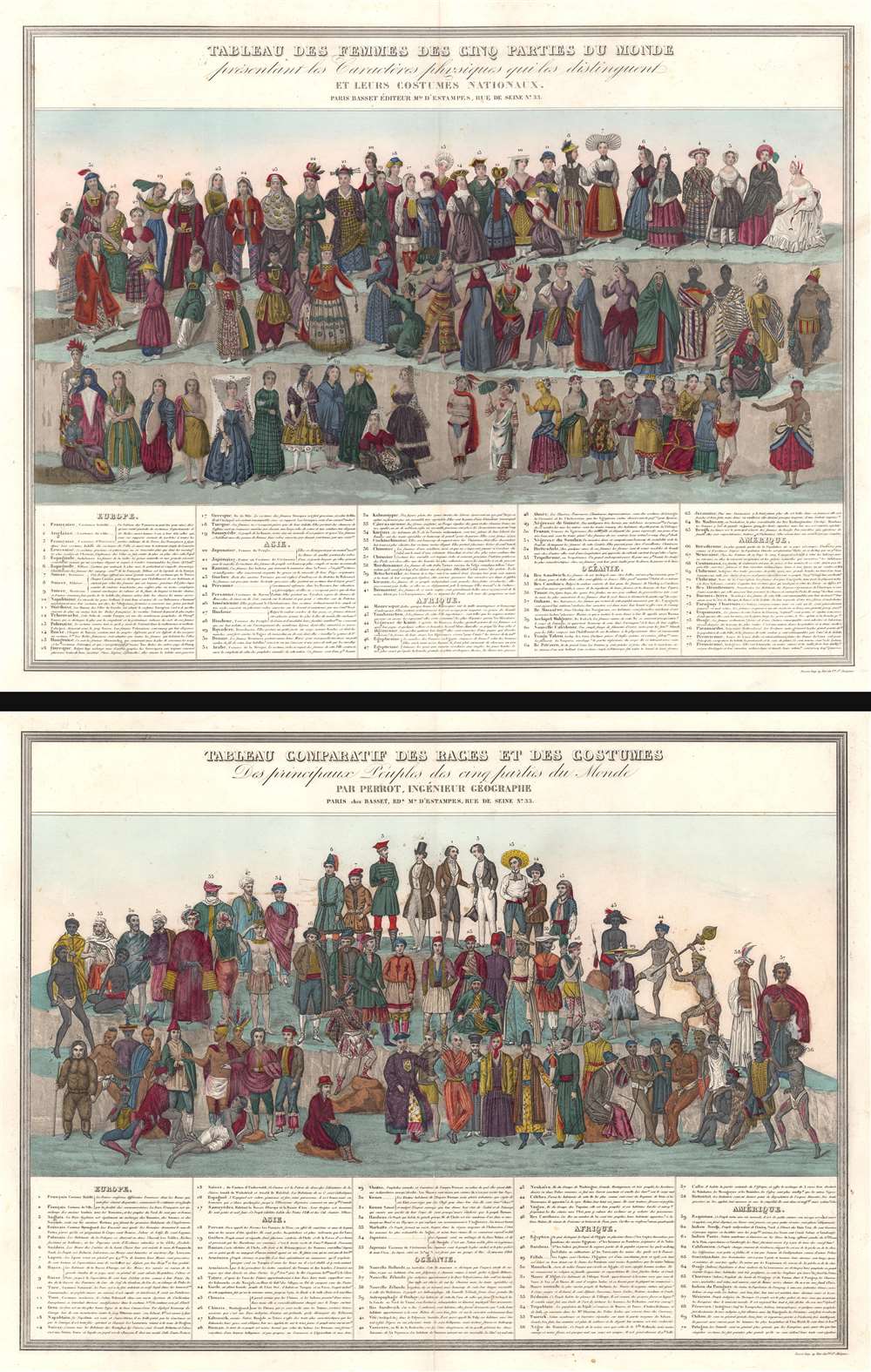 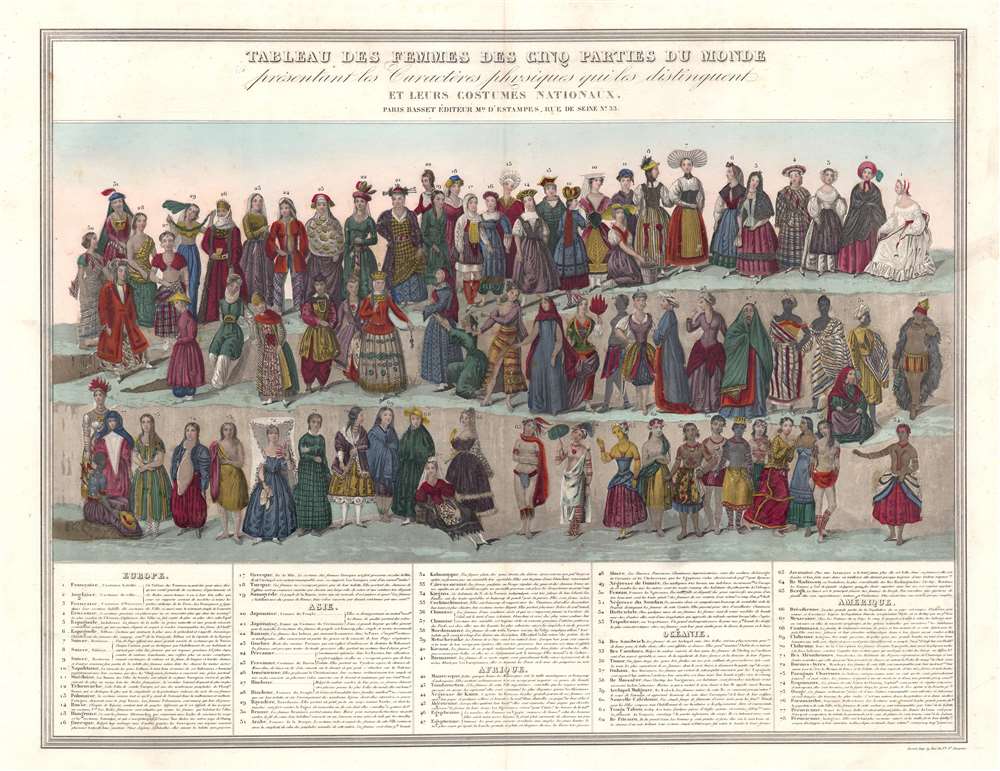 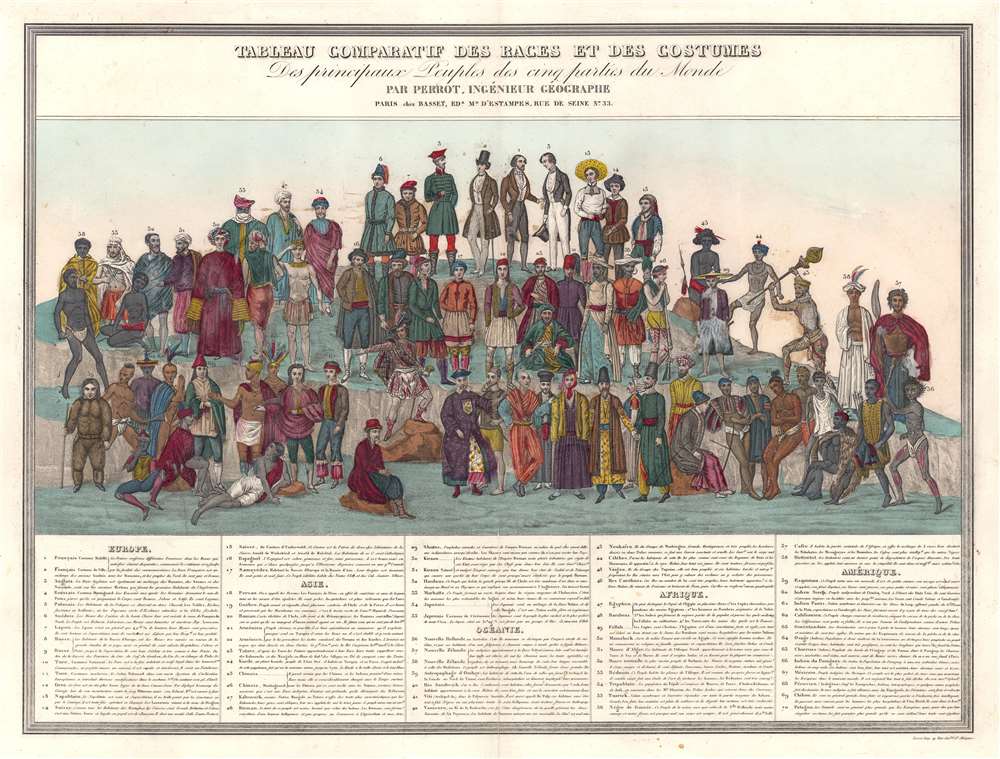 1830 Perrot Comparative Charts of the World's Men and Women

These are c. 1830 Ferdinand Victor Perrot comparative charts of the women and men of the world. Seventy-eight women and seventy men from Europe, Asia, Oceania, Africa, and America are depicted in traditional dress. Each likeness is numbered with a corresponding label (nationality, race, location) and a short description. Intriguingly, the word 'race' is used only in the title of the comparative chart of men, not the comparative chart of women. French, English, Scottish, Persian, Chinese, Japanese, Hawaiian (Iles Sandwich), Berber, Egyptian, Bedouin, Sioux, Eskimo, Peruvian, and Mexican dress are only a small sample of traditional costumes presented. Multiple examples are given of the costumes of several of the 'races', including the formal and everyday wear of French women. Three different Swiss women are included, each representing from a different Swiss city, and two Chinese men and women are present in each of the charts.

This view features extensive use of Gum Arabic.  Most watercolor paints produced from the mid-19th century onward have a gum arabic component which acts a binding agent to hold the pigment in suspension.   Some watercolorists, when mixing their own paints, will add additional gum arabic to the paint, leading to strikingly vibrant, glossy, and depending on the mixture, even transparent and opaque colors.  This technique is also sometimes referred to as gouache or bodycolor.

These charts were created by Ferdinand Victor Perrot, printed by the Fosset Imprimerie, and published by Basset c. 1830. The only examples cataloged in the OCLC are in the collection of the National Library of Australia. Rare on the private market.

Ferdinand Victor Perrot (1808 - 1841) was a French painter and lithographer. Recognized for his talent at a young age, Perrot had completed his first commission by the age of 15 for a local church. A move to Paris came soon after, where he studied with renowned maritime painter Jean Antoine Théodore Gudin. He was a regular exhibitor at the Salon from 1831 until 1844, even though that was three years after his death.He is renowned for his paintings of the countryside in Brittany. He received an invitation to come to St. Petersburg from Tsar Nicholas I, where he was treated in the highest esteem. He was made a member of the Academy of Fine Arts of Saint Petersburg on September 29, 1840 and received a commission for a series of topographical views of Russia and the coast of Finland and lithographs of St. Petersburg. Unfortunately, he died suddenly in Saint Petersburg in 1841 at the age of 33, having only completed two of the commissions. Learn More...