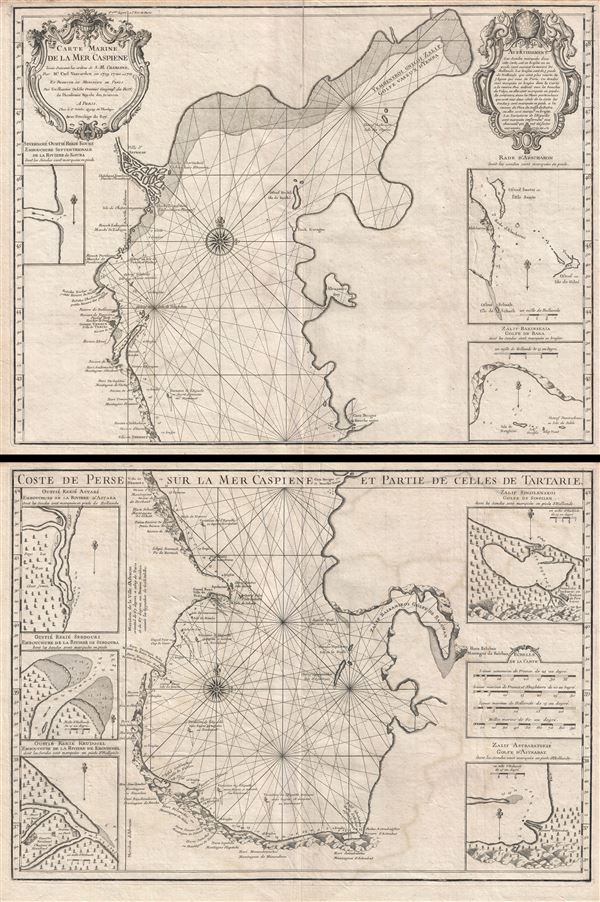 A seminal production - the first accurate map of the Caspian Sea.

A seminal production, this is Guillaume Delisle's 1721 map of the Caspian Sea according to the surveys of Van Verden and S. I Soimonov. It is the first printed map of the Caspian Sea based upon actual survey work. Although other cartographers also copied the work of Van Verden and Soimonov, Delisle was the first, and his mapping is the finest and truest to the original manuscript.

Around 1718 Russian Tzar Peter the Great, sponsored a number of cartographic expeditions to the farthest reaches of his vast empire. One such was a command to map the Caspian Sea given to Dutch navigator Carl Van Verden. Though well known since antiquity, the world's largest lake was largely ignored by surveyors until Van Verden's work in the early 18th century. Van Verden's work was the most advanced mapping of the Caspian Sea to date, offering a new perspective on the region and opening the navigational possibility of the world's largest lake.

In 1721 Peter presented the Paris Academie Royale des Sciences with a copy of S. I. Soimonov and Carl Vanverden's map of the Caspian region.

Without further delay, Delisle redrew the map (with great care), translated the inscriptions into French and printed it on separate sheets in reduced size in the Travaux of the Academy. He also included the map in his Atlas. In this way, the exact outline of the Caspian Sea, drawn on the Russian map of 1720, first appeared in a map prepared in western Europe. In 1723, G. Delisle returned anew to the map of Verden and Soimonov and transposed from it the correct outline of 'Caspia' to the map which he was preparing. This can be seen by the outline of Verden and Soimonov on their map of 1720. This point is confirmed by the caption on the map of 1723 which describes it as 'dressee pour l'usage du Roi (Louis XIV) sur la carte de cette mer faite par l'ordre du Czar (Peter I).' The fact that Delisle used a map with Russian names becomes clear from the inscriptions on the map of 1723. 'Dua Brata ou Les Deux Freres,''Ostrov Giloi-Isle Habite,' 'Ostrov Svinoi ou Isle des Cochons,' 'Krasnie Vodi ou Les Eaux Rouges,' and others.

The map proper is surrounded by eight inset maps detail various gulfs, bays, ports, and rivers. The upper sheet has two large cartouches, the left bearing the title and dedication to Van Verden and the right a description of the map. The right hand cartouche also features two dragons.

This map was originally prepare for publication in the Academie Royale des Sciences journal Bibliographie Generale des Travaus Historiques, but it was also simultaneously issued independently and in various Delisle atlases.