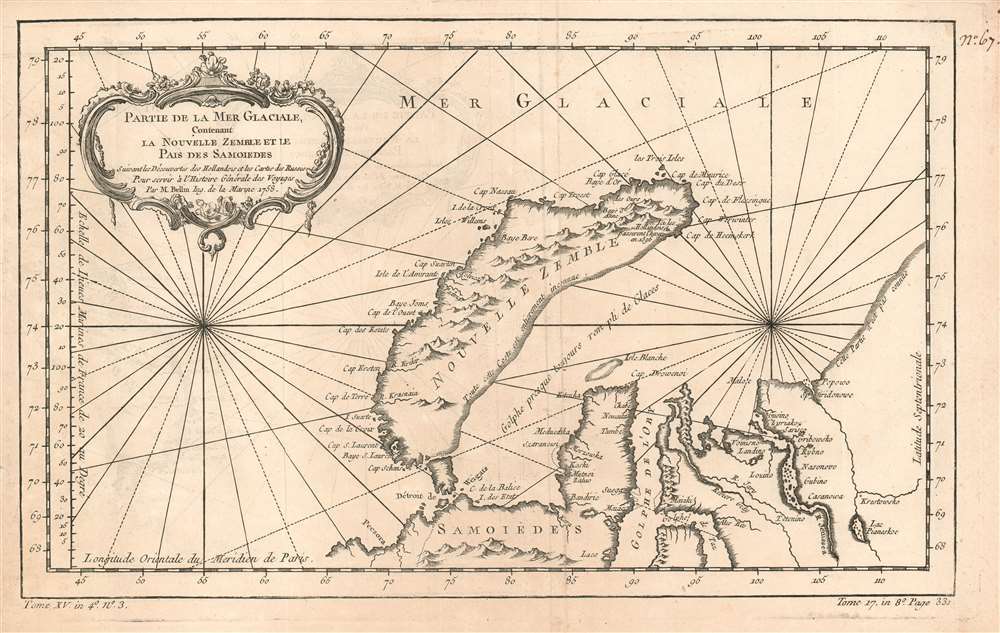 Attractive French Map of the Northern Extremities of Russia.
$250.00

This is a 1758 Bellin map of the northwestern coast of Russia, focusing on the island of Nova Zembla, the mouth of the River Ob, and the limits of European efforts to achieve a northeast passage. The eastern shore of Nova Zembla is sketched in and noted to be entirely unknown; The Kara sea is not named, but it is accurately described as a gulf 'nearly always full of ice.' The site of Barentz's famous refuge in the north of Nova Zembla is marked Ici les Hollandois basserent l'hiver en 1596. The Ob and the Yenisea rivers are shown with reasonable accuracy, but beyond the mouth of the unnamed Pyasina River, the coastline is conjectural and, again, n'est pas connue.

Despite its appearance in Prévost's Histoire générale des voyages - a work perhaps better known for its imaginative flourish than its factuality - Bellin drew on state-of-the-art knowledge for the maps he contributed. Though the map was intended to contextualize Prévost's discussion of Russia's indigenous tributaries to the Tsars, Bellin's map presents a reasonably accurate depiction of what western Europeans understood of the geography of this remote region.

This map appears on the market from time to time; OCLC lists only three copies of the separate map in institutional collections, but Prévost's Histoire and the Harpe editions of it are well represented.


Antoine François Prévost d'Exiles (April 1, 1697 – November 25, 1763), usually known the Abbé Prévost, was a French author and novelist. Having had difficulty in his youth determining a preference for life in the military or life among the Jesuits, he eventually wound up with the Benedictines, with whom he took vows. Despite his taking the vows, the vows evidently did not take with him: in 1728 he abandoned his abbey and fled to London. Naturally, he became a writer. In this he was prolific, both producing his own work and translations of others.’ Learn More...