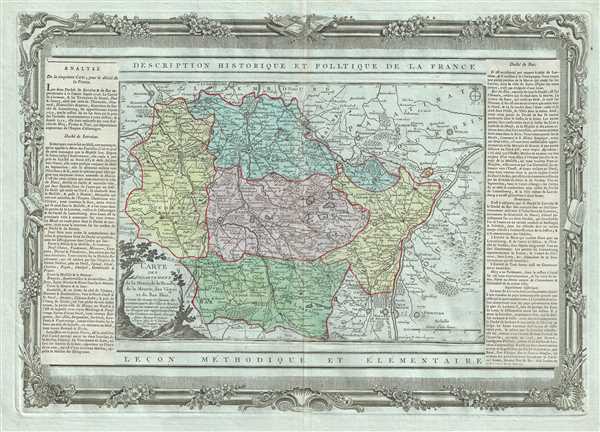 Early map of the Lorraine region of France, known for its cuisine, wines, and unique culture.
$200.00

This is a beautiful map of the Lorraine region in France by the French cartographer Louis Brion de la Tour. It map covers the French departments of Meuse, Moselle, Meurthe-et-Moselle, Vosges and the Bas Rhin department in Alsace, France. Color coding divides the map according to region and notes numerous towns, cities, rivers, forests, mountains and other topographical features.

This region, which traded hands several times between France and Germany, is known for its exceptional cuisine, wines, and unique culture. Alsace is known for its fine white wines and along with Austria and Germany, this region produces the world's most desirable dry Rieslings and both Pinot Noir and Pinot Gris. The region surrounding Strasbourg on the west bank of the Rhine River is known for producing Munster cheese. Meuse is also known for its production of Brie de Meaux cheeses. In fact, more than 60% of Brie de Meaux production takes place in Meuse.

A beautifully engraved title cartouche adorns the bottom left quadrant of the map. To the left and right of the map are paste downs of French text with remarks and description of the map. Surrounding the whole is an elaborate decorative border featuring floral arrangements. This map was issued as plate no. 8 in Desnos’ Atlas National de France, bound with the most deluxe edition of his 1786 Atlas General Methodique et Elementaire, Pour l’Etude de la Geographie et de l’Histoire Moderne.