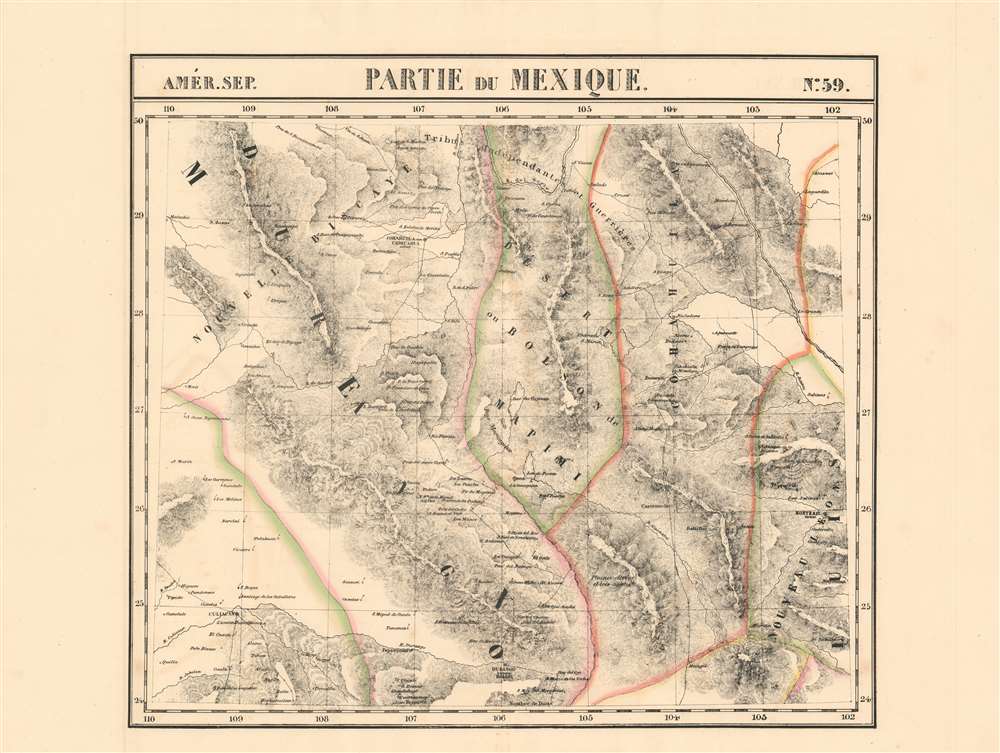 The Best Large-Scale Map of Northern Mexico Based on First-Hand Survey.

This is the 1827 Vandermaelen map of the northern gold and silver mining region of Mexico, showing the states immediately south of the Rio Grande: Monterrey, parts of Chihuahua, Coahuila, Nuevo Leon, Zacatecas, Durango, and Sinaloa. Vandermaelen drew on the incomparable firsthand surveys of Alexander von Humboldt, whose 1803-4 travels informed his definitive 1804 map of Mexico. Vandermaelen's map, by addressing the geographical data at significantly higher scale than the Humboldt map, provides the best large-format mapping of the region - presented with the remarkable clarity afforded by the new printing technology of lithography. The map faithfully retains Humboldt's own array of symbols to distinguish cities and towns, mines, haciendas, ranches and presidios. No other map of the period provides this level of detail and focus on this region.

This map appeared in the fourth part, 'Quatrième partie, Amér. sept.' of Vandermaelen's Atlas universel de géographie physique, politique, statistique et minéralogique. The atlas was produced in one edition in 1827; only 810 complete sets were sold. The full set of six volumes appears in eleven institutional collections in OCLC; the 4th volume alone is listed in 9. This map is listed as a separate only in the Clements Library, New Mexico State University, the University of Texas at Arlington, and Texas Tech.