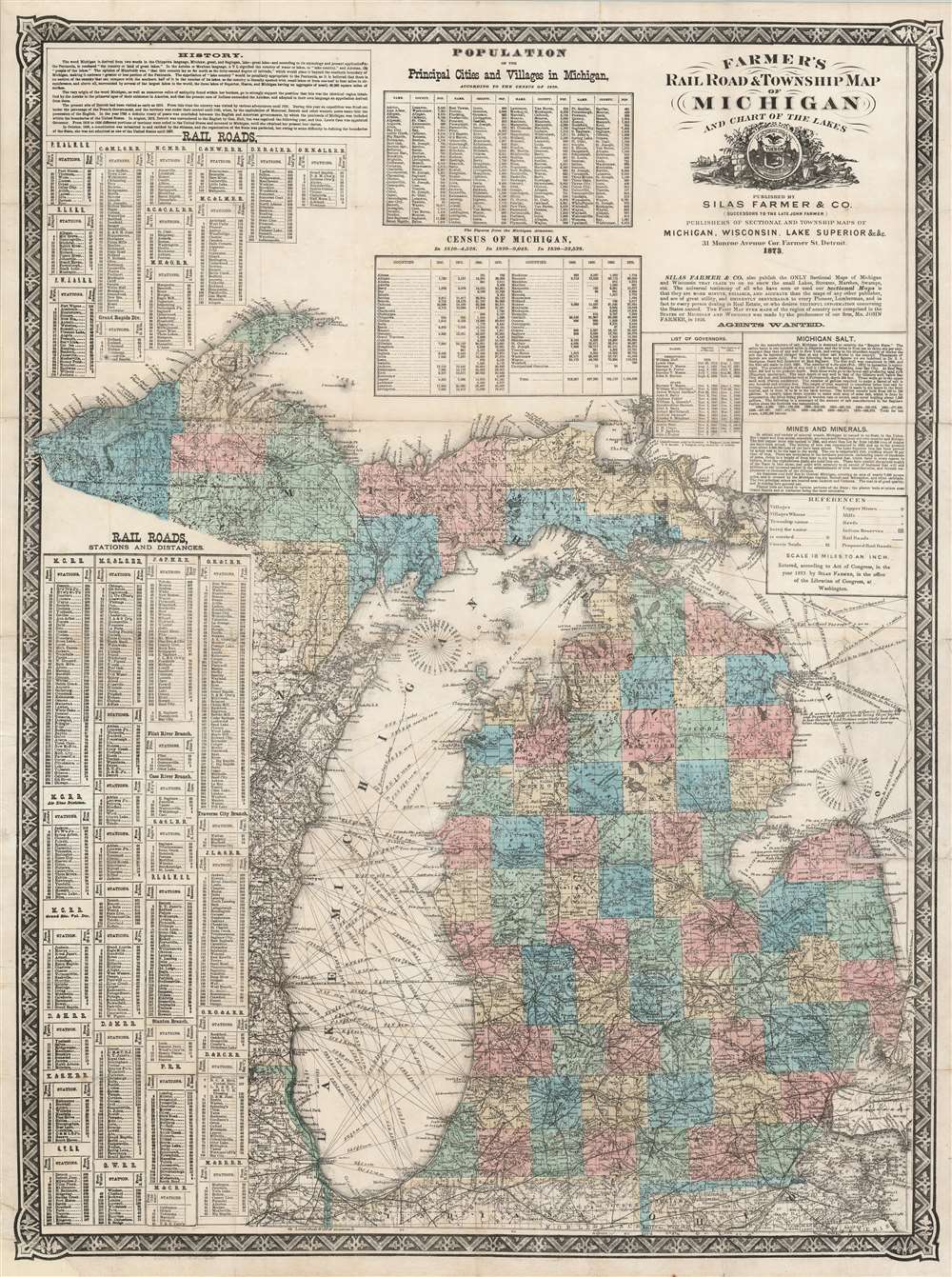 A wonderfully detailed and sought after map of Michigan.
$2,200.00

This is an 1873 Farmer railroad and township map of Michigan. Depicting both the Upper and Lower Peninsula, an incredible amount of detail makes this map a must-have for anyone interested in Michigan history. The township grid overlays the entire state, and counties are labeled and shaded different colors to allow for easy differentiation. Railroads wind their way through the state, including those under construction. Navigation routes crisscross both Lake Michigan and Lake Huron, and depth soundings aid navigation in the area's most challenging waters. Each of the state's railways appears along the left border. Lists of all their stations and the distances between them are provided for each railroad. Statistics concerning the population of Michigan's major cities and towns are provided as well, along with census data by county from 1840 - 1870. Other information provided includes a discussion of the history and meaning of Michigan's name, and the state's salt, mining, and mineral industries.

This map was created and published by Silas Farmer and Company in 1873. The present 1873 edition appears to be the last edition of Farmer's map of Michigan to be published with this title. Five examples are cataloged in OCLC and are part of the institutional collections at the New York Public Library, the University of Michigan, the Library of Michigan, the Allen County Public Library in Fort Wayne, Indiana, and the University of Missouri - St. Louis. All editions of Farmer's maps are sought after by collectors and are scarcely encountered on the market today.

John Farmer (February 9, 1798 - March 24, 1859) was an American cartographer based in Detroit, Michigan, in the first half of the 19th century. Farmer was born in the town of Half Moon, Saratoga County, New York where he trained to become a school teacher, mastering, among other academic skills, drafting. At the time, Michigan Territory has a shortage of school teachers and, in 1821, recruited Farmer to head the Lancasterian School in Detroit. Farmer supplemented his salary by using his drafting skills to copy manuscript surveys for new settlers arriving in Michigan. This work must have brought him to the attention government officials, who employed him to compile and draft a map of Michigan's first federally funded road. In 1826, he also published, along with Orange Risdon, one of the earliest maps of Michigan. Working in the 1830s, Farmer taught himself engraving in order to issue a second, more detailed map focusing on the southern half of Michigan's lower peninsula. In 1835, he issued an important general map of the Territories of Michigan and Wisconsin, which became one of his most enduring maps, going the various editions for nearly 25 years. Most of his early map plates he sold to J. H. Colton, who republished them under his own name and imprint. In 1844, Farmer issued State of Michigan and the Surrounding Country, the map that most defined his career. It became the essential Michigan map, indispensable for anyone planning to emigrate to Michigan, do business, or even move about the state. He updated and revised this map throughout the remainder of his life. He also issued a rare wall map of Michigan measuring 5 x 6 ft. After his death, in March of 1859, following a long mental decline, the Farmer map plates passed to his widow Rachel, and sons, Silas, Arthur, and John, who continued the business under Farmer's imprint. Learn More...


Silas Farmer (June 6, 1839 - December 28, 1902) was an American publisher, historian, and author, and son of the famous cartographer John Farmer. Silas began his career working with his father in the family publishing firm, and continued working for the firm after his father's death. Silas published at least three histories of Detroit, Michigan, entitled The History of Detroit and Michigan (1884), All About Detroit (1899), Guide and Souvenir of Detroit (1891). He died suddenly on December 28, 1902 of an apparent heart attack. Silas married Orpha C. Littlefield in 1868. Learn More...