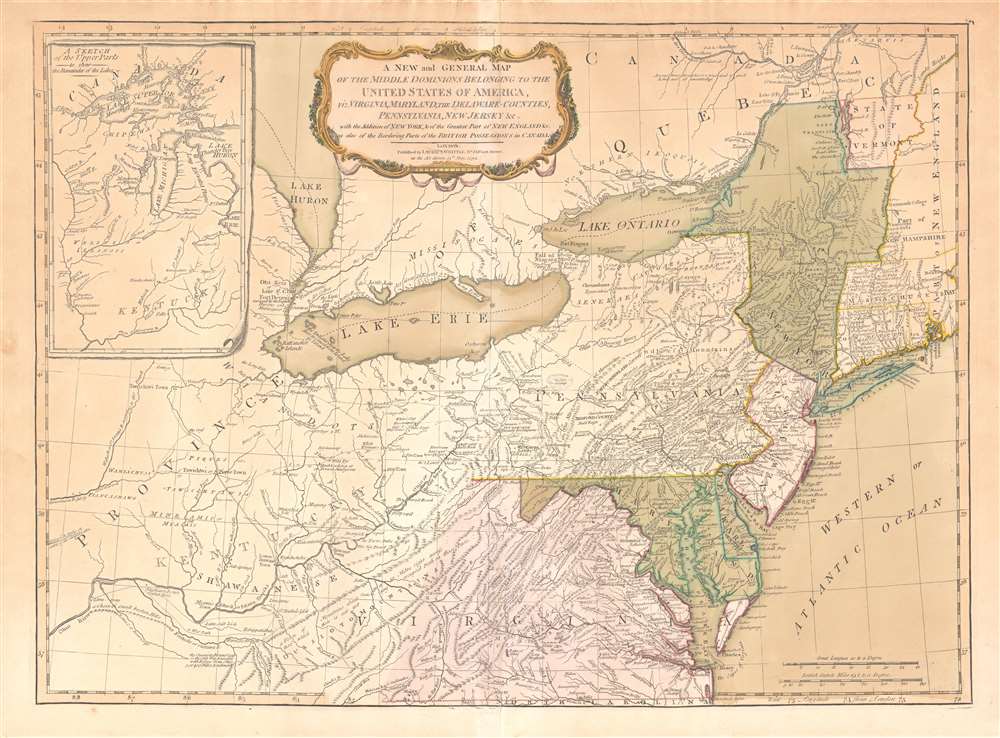 This is the Laurie and Whittle 1794 updated edition of Lewis Evans' foundational 1755 map of the middle part of the British Colonies in North America. Evans' map was the earliest to accurately detail the American frontier at the time of its original publication. It exhibits superb detail in the northern Appalachian Mountains and the Ohio River Valley, providing information about Native American tribes and transport, French and English forts, and other details pertinent to the frontiersman - sources of salt, roads, and trails. It was hailed by Schwartz and Ehrenberg as 'the most ambitious performance of its kind undertaken in America up to that time.' So widely was the excellence of Evans' map recognized that he was unable to make any money on it at all, as it was promptly pirated by Jefferys, Sayer, Kitchen, Bowles, Crevecoeur, and here, Laurie and Whittle. This 1794 edition, at least, updates the map to indicate the outcome of the American Revolution - it names the United States and includes the boundary line between the United States and Canada as determined by the 1783 Treaty of Paris. This is also the first edition of the Evans map to include the new state of Kentucky - although erroneously positioned north of the Ohio River.

This edition of the Evans map - the only one to include post-Revolutionary War detail - was engraved in 1794 by London publishers Laurie and Whittle. It appeared in editions of Thomas Kitchin's New Universal Atlas. The atlas, and separate examples of the map, are well represented in institutional collections.

Lewis Evans (1700 - June 11, 1756) was a Welsh born American surveyor and geographer active in Philadelphia and the Ohio Valley in the first half of the 18th century. He was born in Llangwnadl, Carnarvonshire, Wales - a fact which he revealed in his will. Otherwise little is known of his early life. The first mention of Evans is his purchase of Edward Cocker's Arithmetick at Benjamin Franklin's Philadelphia bookshop on November 27, 1736, so he must have immigrated to the colonies sometime before this. There is some suggestion that Evans may have traveled extensively abord, even as far as Asia, but this is largely unsubstantiated. His cartographic corpus is small but significant. Other than a number of minor survey maps focusing on holdings in eastern Pennsylvania, Evans's published only two major maps, A Map of Pennsylvania, New Jersey, New York, and the Three Delaware Counties and A General Map of the Middle British Colonies in America, the latter being a most significant and a landmark production focusing on Trans-Appalachia. It is noteworthy that Evans was a meticulous cartographer and, unlike most mapmakers of this period, based his maps an actual survey work which he personally conducted. Evans died in Philadelphia on June 11, 1756, one year after his greatest work was published. The body of Lewis Evans lies in the Christ Church Burial Ground in Philadelphia. After his death, his only daughter Amelia was brought up by Deborah and Benjamin Franklin. Learn More...

Kitchin, T. A New Universal Atlas by Thomas Kitchin, Senior, and others, (London: Laurie and Whittle) 1799.