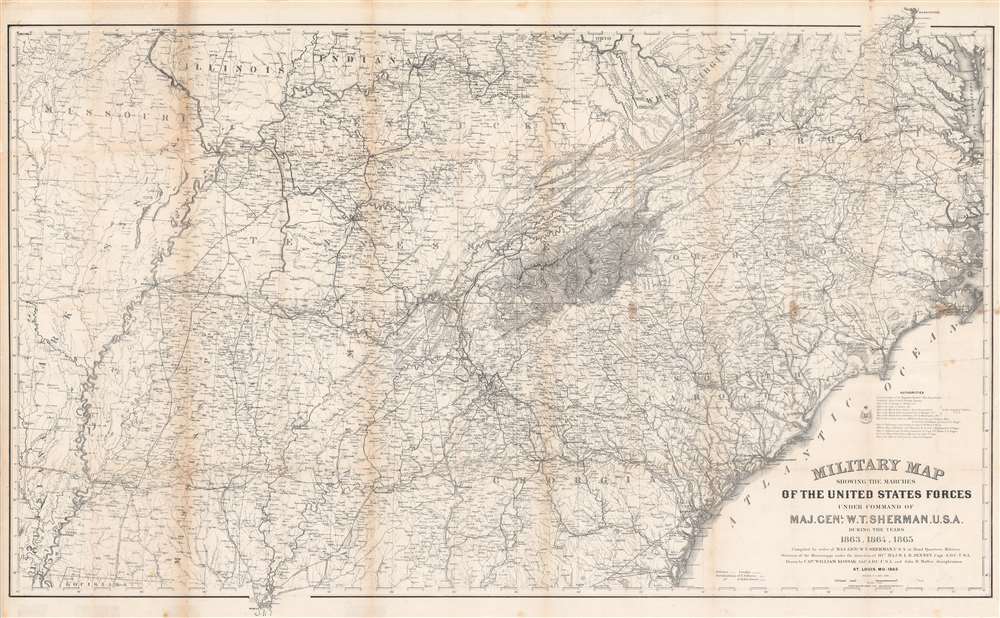 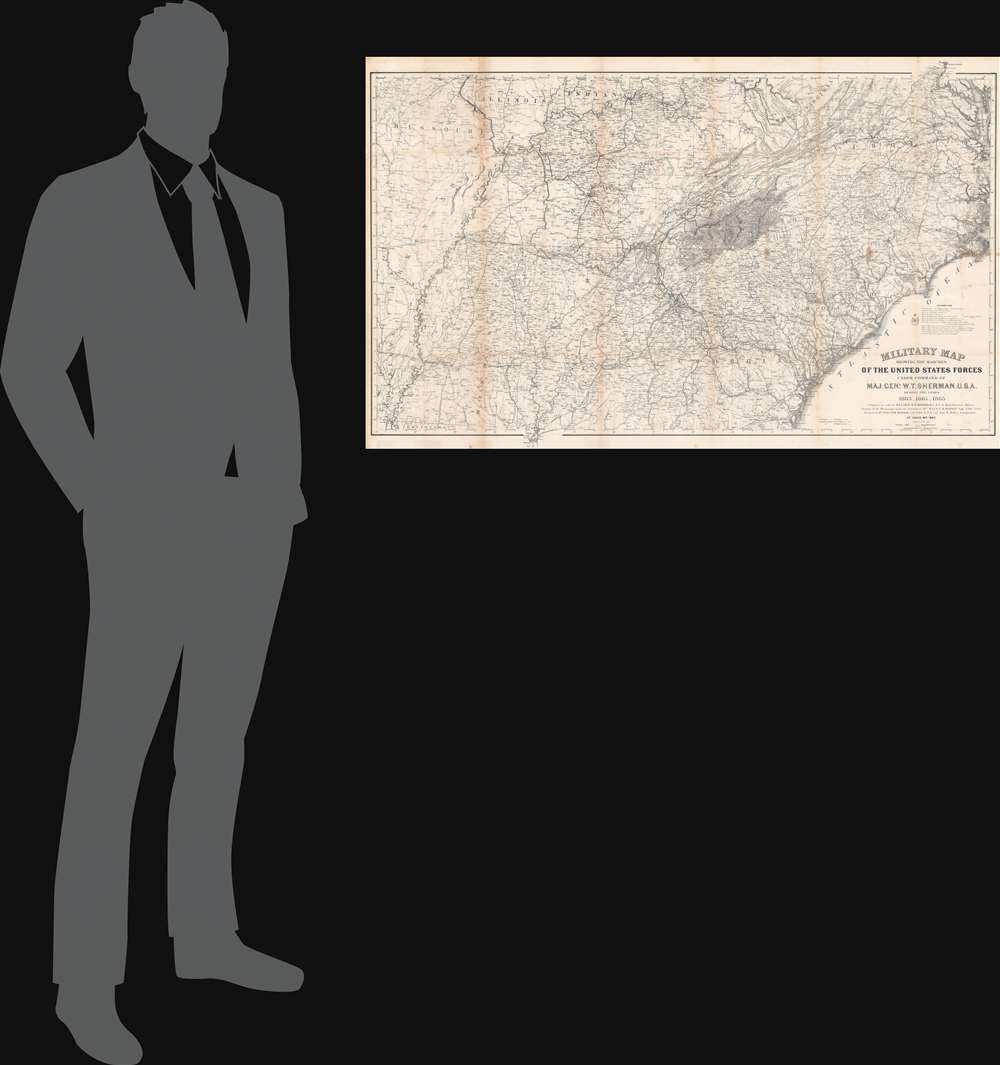 This is an 1865 William Kossak map of the southeastern United States tracing the movements of Union Army forces under the command of Major General William Tecumseh Sherman in 1863, 1864, and 1865. Coverage extends from Missouri, Arkansas, and Louisiana to North Carolina and the Atlantic Ocean, and from Missouri, Illinois, Indiana, Kentucky, Ohio, and Virginia to Mobile Bay. Throughout Kossak, and John B. Muller, a draughtsman, achieve astounding detail. The routes followed by General Sherman's units, which include the 4th, 14th, 15th, 16th, 17th, and 20th Army Corps are illustrated. Sherman's movement on Atlanta (a massive operation during which he orchestrated the movements of three separate armies) and Sherman's pursuit of Confederate General John Bell Hood both appear as well. The movements of General J. H. Wilson's Cavalry Corps and those of General G. Stoneman's Cavalry Corps are also depicted, along with Union and Rebel fortifications.

Sherman's involvement in the siege of Vicksburg, the Chattanooga Campaign, the Atlanta Campaign, the March to the Sea, and the Carolinas Campaign are traced, emphasizing the territorial expanse General Sherman covered during the war.

A Closer Look at the Details

A highly detailed representation of a pivotal moment in American history, cities, towns, and villages throughout the region are labeled. Topography throughout illustrate the terrain Sherman's armies had to contend with. Railroads, a new technology key to both the Union and Confederate mobility, snake across the map, connecting urban centers with small towns. Numerous Civil War battles occurred either at rail junctions or close by, and one of the major objectives of Sherman's Atlanta Campaign and the March to the Sea was to cripple the rail network in order to cut off Confederate armies (particularly General Robert E. Lee's Army of Northern Virginia) from supply centers.

This map was drawn by William Kossak and John B. Muller, compiled under the direction of Brevet Major William LeBaron Jenney, and lithographed by Ferdinand Mayer in New York City in 1865. Two other editions of this map have been published, one by H.C. Evans and F. Courtenay of the Army Corps of Engineers and the other by Julius Bien. A single example of the edition lithographed by Ferdinand Mayer (the edition offered here) is cataloged in OCLC as part of the collection at the Allen County Public Library in Fort Wayne, Indiana. We are aware of another example which is part of the collection at the University of South Carolina. All editions of this map rarely appear on the private market.

William Kossak (fl. c. 1860 - 1863) was born in Prussia and was apparently a refugee from the political turmoil that cut through the region in 1848. Upon outbreak of the American Civil War, Kossak immediately volunteered and received a commission as a Lieutenant in the 5th Missouri Infantry on May 20, 1861. By August he had earned a promotion to Captain and had been given the position of Additional Aide-de-Camp in the volunteer Engineers. He went on to serve on the staffs of the most celebrated generals of the western theater, including Grant and Sherman. Kossak participated in many campaigns during the war, including at Fort Henry, Fort Donelson, Shiloh, Corinth, Vicksburg, the Atlanta Campaign, and the March to the Sea. During most of this time Kossak reported directly to General Sherman and he earned personal commendations from both General Sherman and General Grant. He attained his highest position, Chief Engineer of the 17th Army Corps, during Sherman's campaigns in Georgia. Little is known about Kossak's life before or after his military service. Learn More...


William LeBaron Jenney (September 25, 1832 - June 14, 1907) was an American architect and engineer who, in 1884, built the first skyscraper and became known as the Father of the American skyscraper. Born in Fairhaven, Massachusetts to William Proctor Jenny and Eliza LeBaron Gibbs, Jenny was educated at Phillips Academy in Andover, before attending the Lawrence School at Harvard. Before finishing at Harvard he transferred to the École Centrale des Arts et Manufactures (École Centrale Paris), where he studied engineering and architecture. While in Paris he studied the latest iron construction techniques along with the classical functionalist doctrine of Jean-Micolas-Louis Durand, who was Professor of Architecture at the École Polytechnique. Jenney graduated in 1856, one year after his classmate Gustave Eiffel, who would go on to design the Eiffel Tower. Jenney returned to the United States in 1861 to join the Union Army. During his service Jenney designed fortifications for both General Sherman and General Grant. Jenney had reached the rank of major by the end of the war and held the position of Engineer-in-Charge of Nashville's Union headquarters. Jenney moved to Chicago in 1867, where he opened his own architectural office with specializations in commercial building and urban planning. During the late 1870s, Jenney began commuting weekly to the University of Michigan, where he started the architecture program and also taught courses. Jenney married Elizabeth 'Lizzie' Hannah Cobb of Cleveland, Ohio on May 8, 1867, with whom he had two children, Max and Francis. Learn More...