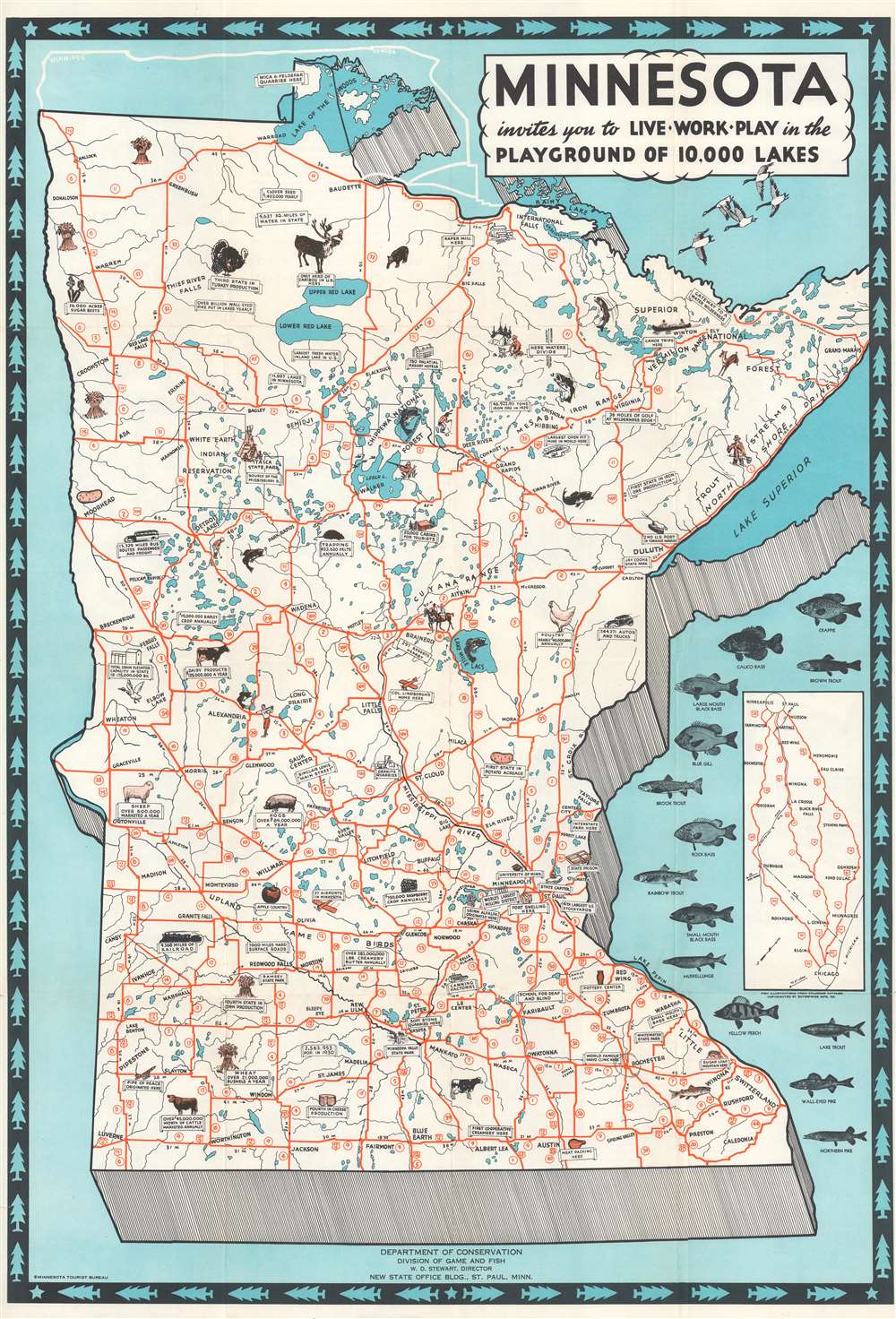 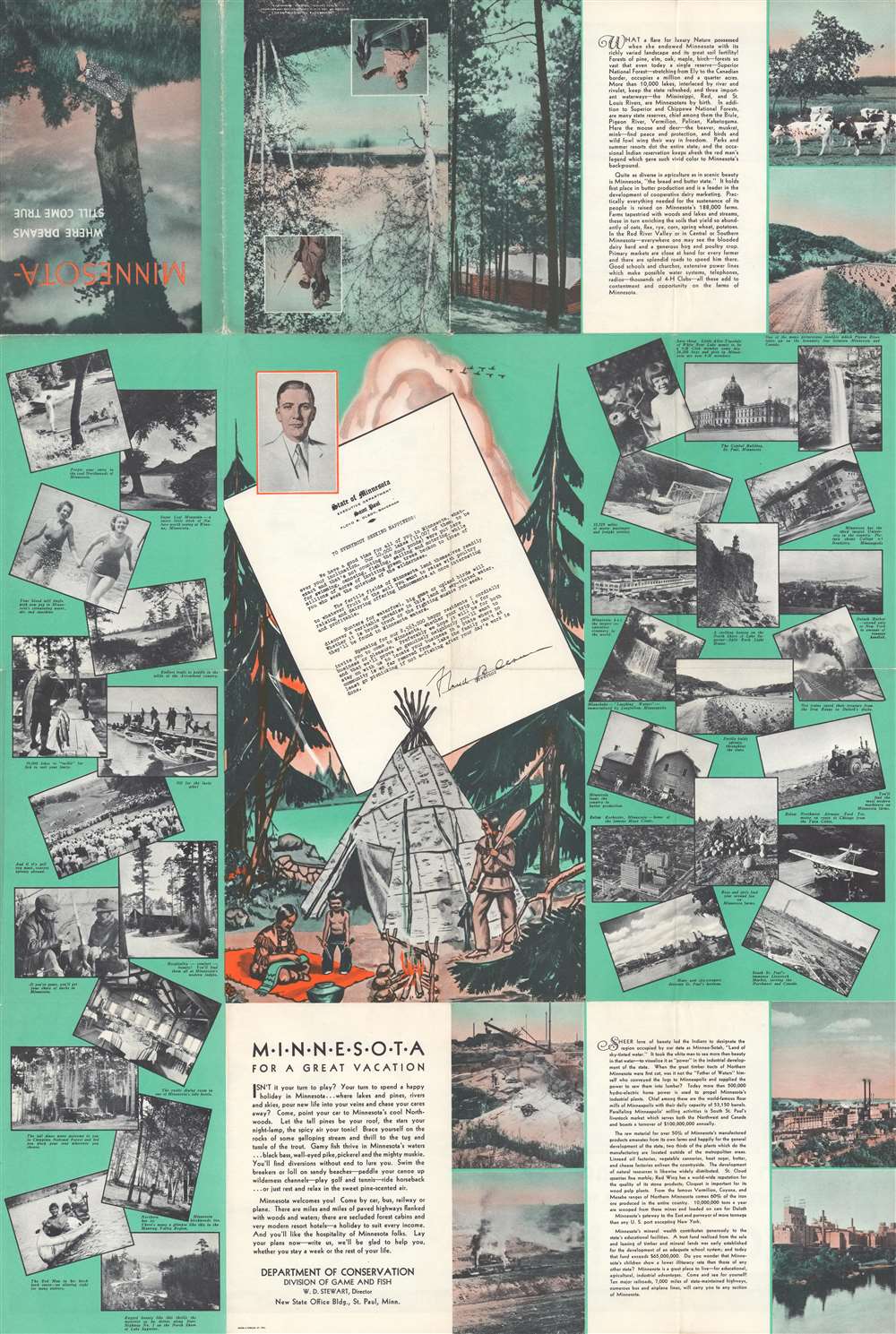 This c. 1935 Minnesota Tourist Bureau pictorial tourist map of Minnesota presents an intriguing mix of economic facts and tourist sites. Minnesota's fishing, while not expressly touted, takes center stage. Illustrations of fourteen different fish species 'swim' along the right border and facts about the piscine population are scattered throughout. Red lines trace state highways, and white banners proclaim everything from the 'largest freshwater inland lake in the U.S.' and the '11,007 lakes in Minnesota' to the state's annual dairy, barley, and raspberries production. The University of Minnesota and the Mayo Clinic both make an appearance. State parks and an Indian reservation are illustrated next to references to resort hotels, tourist cabins, and '36 holes of golf'.

This map was created and printed by Brown and Bigelow of Saint Paul for the Minnesota Tourist Bureau c. 1935.

Hiram D. Brown (November 10, 1848 - April 17, 1905) was an American businessman and printer. Born in Lorraine, New York, Brown moved to Minnesota in the early 1860s. He then worked as a printer's apprentice in Lake City, Minnesota, and later in Red Wing, Minnesota. After his apprenticeship, he served as the publisher of the Lake City Sentinal for twelve years. Brown moved to St. Paul in 1881 and soon formed a business partnership with B.B. Herbert known as Brown and Herbert. This business later became Brown and Treacy, and was finally incorporated as the Brown, Treacy, and Sperry Company in 1901. At the time of his death, Brown was president of the Brown, Treacy, and Sperry Company and a senior member of Brown and Bigelow, which he founded with Herbert Huse Bigelow in 1896. Brown died of pneumonia. Brown and Bigelow, a printing firm based in St. Paul, is still in operation today. Learn More...


Herbert Huse Bigelow (May 18, 1870 - September 16, 1933) was an American businessman and printer. Born in Brookfield, Vermont, he moved to Iowa with his family at the age of thirteen. He later graduated from Grinnell College and worked as a calendar salesman after graduation. He founded Brown and Bigelow, a printing firm, in Saint Paul, Minnesota, in 1896 with Hiram D. Brown. Bigelow was convicted of tax evasion in 1924 and sentenced two three years in Leavenworth Penitentiary, but only served eight months. During his time in prison, he made friends with Morris Rudensky, the infamous safe-cracker. After his release, Bigelow helped institute innovative convict rehabilitation programs at Brown and Bigelow, eventually hiring hundreds of ex-convicts. One of these ex-convicts, Charlee Ward, would eventually become president of the company. Bigelow served as the company's president until 1933 when he drowned in a lake, leaving an estate valued at $3 million. Learn More...