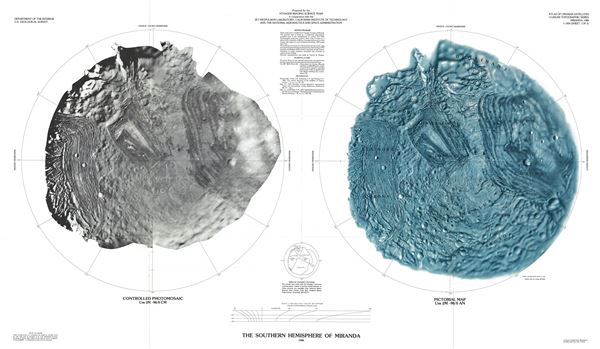 This is a beautiful example of the U.S. Geological Survey's 1988 map of the southern hemispheres of Miranda, the smallest moon of the planet Uranus. The map contains two images, the left being a controlled photomosaic and the right a pictorial map. It depicts the southern hemisphere of the moon based on images from Voyager 2.

The Voyager 2 spacecraft, launched in August 1977, is the only spacecraft to explore Uranus and Neptune. Along with Voyager 1, its primary mission at the time of launch was to explore Jupiter and Saturn. Since then, the mission objectives have been extended to exploring the Solar System beyond the outer planets, as far as the Sun's sphere of influence and possibly even beyond the outer limits of our Solar System. It is also the only spacecraft to have studied all four giant planets of our Solar System at close range. Both space crafts are carrying a golden record explaining their origins and containing sounds and images portraying Earths life and its culture in all its diversity. Although departing the Solar System in different directions, both Voyagers have reached the Heliosheath, where the solar wind mixes with interstellar wind.

This map was prepared for the Voyager Imaging Science Team in cooperation with the Jet Propulsion Laboratory, California Institute of Technology, and the National Aeronautics and Space Administration and published by the U.S. Geological Survey as Atlas of Uranian Satellites Topographic Series map I-1920 sheet 1.