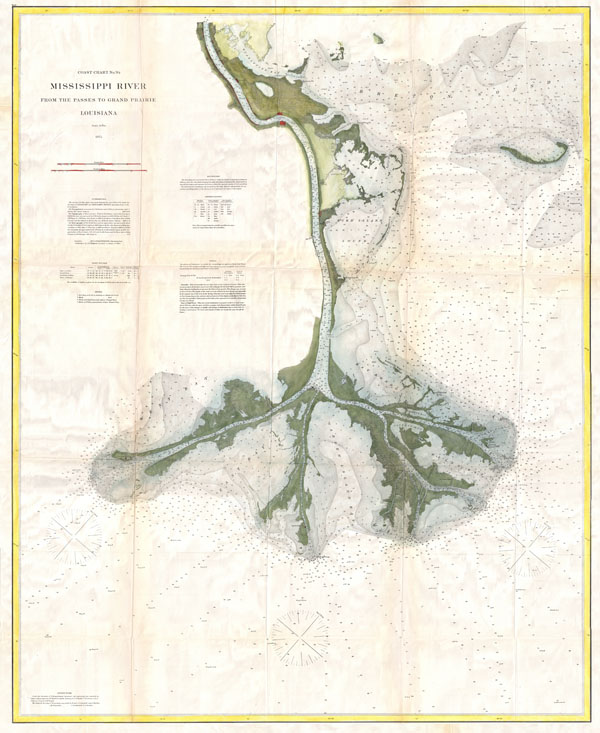 The culmination of nearly 15 years of intense survey work, this is 1874 nautical chart is possibly the most attractive and dramatic map of the Mississippi River Delta to emerge from the U.S. Coast Survey. Due to the quick and dramatic changes in the Delta area due to sudden storms and hurricanes, charting the Mississippi Delta was one of the U.S. Coast Survey's most daunting tasks. Details the course of the Mississippi River from Quarantine bay southward to where it divides into numerous passes and bays. Names Grand Bay, Bird Island Sound, West Bay, East Bay, Garden Island Bay, Blind Bay, Bull Bay and Bay Rondo. Also offers some inland detail noting Fort Jackson, Fort St. Philip, various farms, several canals, numerous bayous, and important lighthouses. Thousands of soundings in feet. Notes on tides, sailing instructions, and commentary on the chart appear in the upper left quadrant. The triangulation, topography and hydrography for this work is largely the work of F. H. Gerdes, Ch. H Boyd, Guthrie, and their assistants. The work of surveying the Mississippi Delta was commenced at the instigation Superintendent of the Survey A. D. Bache but not fully realized until the tenure of Benjamin Peirce.

Very good. Minor toning and verso reinforcment along original fold lines. Else clean.
Looking for a high-resolution scan of this?