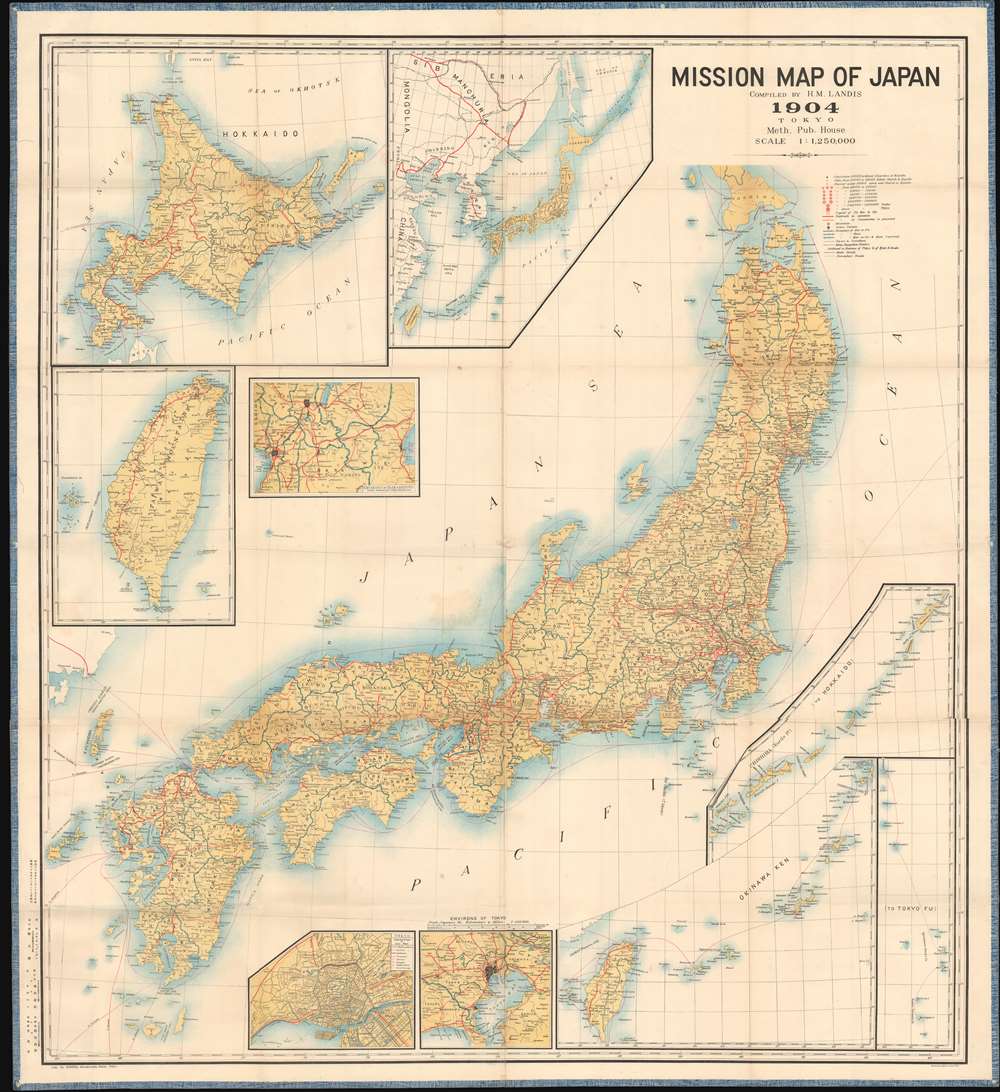 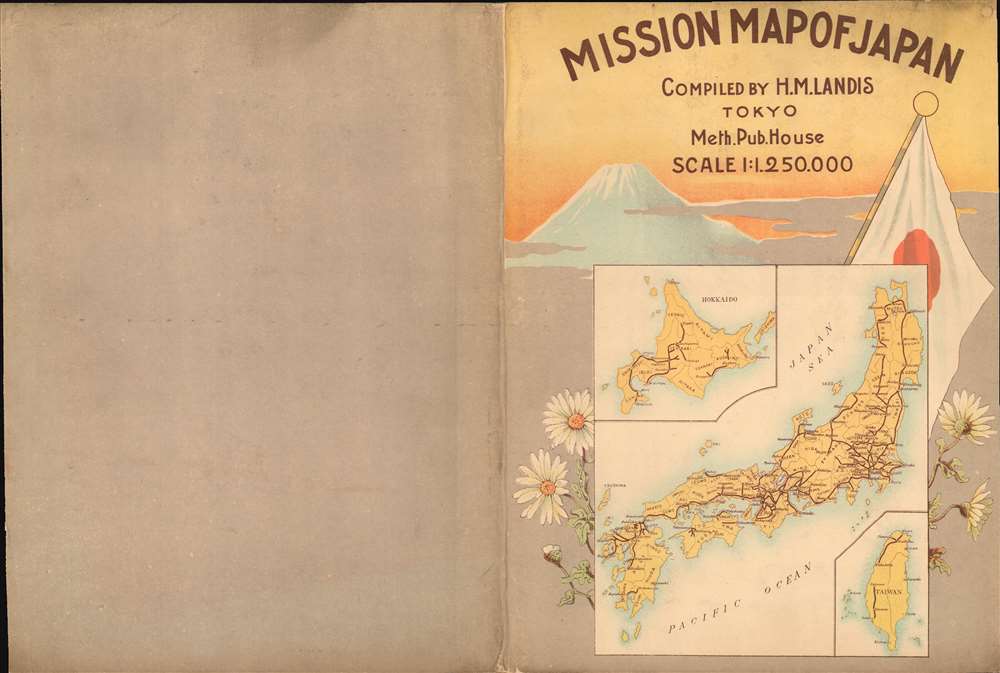 A breakdown of missionary evangelism in pre-War Japan.
$1,500.00

This is a 1904 or Meiji 37 Henry Mohr Landis chromolithograph missionary map of Japan. Created for American missionaries in Japan, the islands of Honshu, Kyushu, and Shikoku occupy the center. An inset of Hokkaido occupies the upper left corner. It is surrounded by insets focusing on Taiwan, the environs of Osaka and Kyoto, and the region from the Kuril Islands to Taiwan. More insets appear in the lower right and detail Tokyo, the environs of Tokyo, the Okinawa Archipelago to Taiwan, the Bonin Islands, and the Kuril Islands.

A Map for Missionaries

Published by the Methodist Publishing House in Tokyo, a key just below the title explains the different icons used throughout the map. These icons, all of which incorporate a red cross, identify the locations of churches and kogisho (公議所; religious lecture halls). Simple dots mark cities without churches or kogisho. The map makes evident Christian evangelism flourished, was rejected, or remains unintroduced. Many areas farther removed from the main railway lines (which are marked by thick red lines), are unexposed, suggesting missionaries prioritized easy-access regions.

This map is a finely executed 4-color chromolithograph - the very existence of which underscores the degree to which Japan embraced western technology in the preceding 20 years. Chromolithography is a color lithographic technique developed in the mid-19th century. The process involved using multiple lithographic stones, one for each color, to yield a rich composite effect. Oftentimes, the process would start with a black basecoat upon which subsequent colors were layered. Some chromolithographs used 30 or more separate lithographic stones to achieve the desired effect. Chromolithograph color could also be effectively blended for even more dramatic results. The process became extremely popular in the late 19th and early 20th centuries, when it emerged as the dominate method of color printing. The vivid color chromolithography produced made it exceptionally effective for advertising and propaganda imagery.

This 1904 map was compiled by Henry M. Landis, lithographed in 4 colors by Hoeisha of Kanda Mitoshirocho, Tokyo, and published by the Methodist Publishing House. It was printed on October 25 and released on December 18 of that year. Seven examples are cataloged in OCLC and are part of the institutional collections at Columbia University, the Western Theological Seminary, the University of Missouri-Kansas City, the University of California Santa Barbara, the University of Cambridge, the Bibliothèque nationale de France, and the National Library of Australia. Rare on the market.

Henry Mohr Landis (March 9, 1857 - September 6, 1921) was an American missionary active in Tokyo, Japan in the late 19th and early 20th centuries. Landis was born in to a Mennonite family in Colebrookdale, Berks County, Pennsylvania. He completed his primary studies at the Keystone State Normal School (Kutztown, PA) and went on to take a degree in mathematics from Princeton, from which graduated in 1883). He received the J. S. K. Mathematical Fellowship to study in Berlin, Germany for one year. Returning to the U.S., Landis entered the Princeton University Seminary in 1884, graduating in 1887, when he was licensed and ordained by the Presbytery of New Brunswick, New Jersey. He then traveled to Japan as a missionary, arriving in Yokohama on July 2, 1888. He was closely associated with the Meiji Gakuin School, where he was a professor of Logic and Psychology from 1888 to 1893, and a professor of the New Testament from 1893 to 1919. In 1890 he designed the Meiji Gakuin Memorial Hall, still a part of the Meiji Gakuin campus. Poor health forced him to return to the United States in 1919, but he was back in Japan by 1921. Landis remained in Koriyama, Japan, until his death from 'paralysis' in 1921. He is interred on the Temple Ground at Meiji Gakuin. Learn More...


Hoeisha (方英舎; fl. c. 1890 -1910) was a Japanese lithographer active in Tokyo in the late Meiji Period (late 19th - early 20th centuries). His offices were located in the Kanda Mitoshirocho district of Tokyo. His work exhibits sophisticated chromolithographic technique and suggest he was able to print at both small and large scale. There is a small collection of chromolithograph postcards by Hoeisha at the Boston Museum of Fine Arts. He is associated with only one large map, an impressive missionary map of Japan issued with Henry Mohr Landis. Learn More...