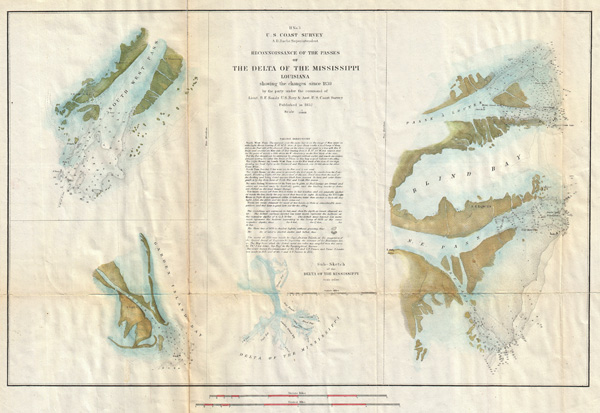 An attractive hand colored 1852 U.S. Coast Survey triangulation chart or map of the Mississippi Delta. This map is in fact a composite of four different maps detailing different parts of the Delta. The first map, in the upper left quadrant details the Southwest Pass entrance to the Mississippi. Map number two, in the lower left quadrant, details South Pass and Garden Island Bay. Map number three, bottom center details the Delta as a whole. Map number four, occupying the entire right hand section of the map shows Passe a Loutre, Blind Pay and North East Pass. Shows the locations of light houses, shoals, Drift Trees, Stakes, and offers innumerable depth soundings. The center of the map is occupied by a large text area offering detailed sailing instructions. Prepared by a party under the command of Lieutenant B. F. Sands. Compiled under the direction of A. D. Bache, Superintendent of the Survey of the Coast of the United States and one of the most influential American cartographers of the 19th century.